Service offering ‘journalism, narrated’ is on course to raise €800,000 in funding this year 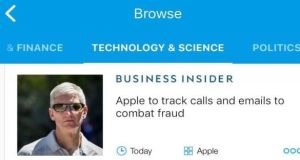 Noa employs 12 full-time staff and expects this will reach 15 in the near future, while it also has a team of seven narrators spread across the US, the UK and Ireland.

Irish media start-up Noa, which narrates written journalism in audio form, has added the New York Times and the Economist to its client list.

The Dublin company’s app now offers spoken-word versions of articles from eight news publishers, including The Irish Times, and is on track to reach 12 by the end of 2018.

Noa co-founder Gareth Hickey said the addition of the Economist and the New York Times was “a big milestone” for the company, which derives its name from “news over audio”.

“It takes a lot of time to build publisher relationships – the level of trust required is extremely high,” he said.

The service will narrate a daily selection of New York Times articles and weekly Economist articles, as selected by Noa’s editors.

The other publishers in its line-up are the Financial Times, Bloomberg, the Independent (UK), Business Insider and the Evening Standard, while it will begin testing a German-language offering in November.

The Dublin company, founded by former equity analyst Hickey and former business analyst Shane Ennis, has raised €500,000 in seed funding since May and hopes to raise a further €300,000 by end of year.

It employs 12 full-time staff and expects this will reach 15 in the near future, while it also has a team of seven narrators spread across the US, the UK and Ireland.

The latest update to the customisable app includes “playlists” based on various topics, such as “inspirational stories” and “US mid-term elections”.