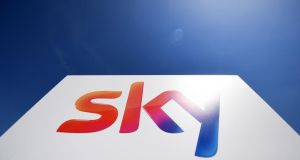 The Comcast offer values Sky at almost £4 billion more than the Disney-Fox bid and was recommended to shareholders by Sky’s independent committee. Photograph: Andy Rain/EPA

Comcast has triumphed over 21st Century Fox and Walt Disney in the auction for Sky with a £30.6 billion (€34 billion) bid in a deal that will redraw the global media landscape.

Comcast’s £17.28 a share bid beat a rival £15.67 a share bid from Fox, which was backed by Disney, and came in the third and final round of an auction when each bidder was asked to make their best offer for the broadcaster.

The Comcast offer values Sky at almost £4 billion more than the Disney-Fox bid and was recommended to shareholders by Sky’s independent committee, which was set up to evaluate the takeover bids. It brings an end to Rupert Murdoch’s long association with Sky, which he founded in 1989, and which ushered in the pay-TV era in the UK.

Sky Ireland employs about 1,000 people, mostly in Dublin. Sky does not break out how many customers it has in the Republic, however it is the leading pay-TV company in this market and is estimated by research company Nielsen to provide satellite television to 640,000 households. It also sells broadband, television and telephony bundles.

The competing bidders had circled each other warily on a day when the fate of Britain’s largest pay-TV player was to be decided. In the first two rounds, when bidders were able to respond to rival bids, they each edged up their initial offers “by pennies”, according to one person close to the process. This was to ensure that they were able to deliver their best offer in a sealed, final-round bid.

But the Disney-Fox side surprised those involved in the process with their final £15.67 a share offer. “Disney wanted it but they weren’t going to overpay,” one person briefed on the process said. Another said: “Comcast just paid $3 billion (€2.5 billion) more than they had to.”

The auction put Sky at the centre of a high-stakes poker game between the world’s two largest media groups.

Disney and Comcast, which owns NBC Universal, have sparred this year in a tussle for Rupert Murdoch’s Fox empire. In the summer Disney prevailed with a bid for Fox’s entertainment businesses, including its Hollywood movie studio, cable channels and Star of India, that valued them at $71.3 billion not including debt. The assets included Fox’s 39 per cent stake in Sky – which means Disney will be able to recoup about $15 billion if, as expected, it sells its Sky shares to Comcast.

With operations in Germany, Italy, Austria and Ireland, as well as the UK, Sky has 23 million subscribers and will give Comcast a powerful launch pad for new digital services in an era increasingly shaped by streaming providers such as Netflix and Amazon.

“This is a great day for Comcast,” Brian Roberts, Comcast’s chief executive, said in a statement. “Sky is a wonderful company with a great platform, tremendous brand and accomplished management team. This acquisition will allow us to quickly, efficiently and meaningfully increase our customer base and expand internationally.”

Disney declined to comment on the auction but Fox said in a statement that it was “considering its options” regarding the 39 per cent stake in Sky and “would make a further announcement in due course”.

The conclusion of the auction brings to an end one of the UK’s longest running takeover battles.

With the tabloid newspaper phone-hacking scandal and the behaviour of some journalists at Murdoch newspapers still fresh in people’s minds, the UK government was under pressure to ensure that a sale of Sky did not hand Mr Murdoch more influence of the UK’s media market. A lengthy regulatory review process then followed.

Ofcom, the UK’s media watchdog, and then the Competition and Markets Authority scrutinised the Fox offer. But with the regulatory review process dragging on, Mr Murdoch stunned his rivals last November when he revealed plans to break up his media empire, selling most of his entertainment assets, including his movie studio and portfolio of cable channels, to Walt Disney.

That deal included Fox’s stake in Sky, putting Disney in the driving seat to acquire the rest of the company. But Comcast crashed the party. It made a rival bid for the Fox assets, which it later dropped – but not before Disney had to increase its own offer. Comcast then made a separate bid for Sky.

Before Fox made its offer for Sky in December 2016, Sky shares were trading around £7.50. The final £17.28 bid from Comcast represents a more than 100 per increase on Sky shares before that first Fox offer.

Sky’s management team, led by chief executive Jeremy Darroch, is expected to stay with the company, which will give its new owner significant cash flow and a big European footprint.

“This is the beginning of the next exciting chapter for Sky,” said Mr Darroch. “As part of a broader Comcast we believe we will be able to continue to grow and strengthen our position as Europe’s leading direct-to-consumer media company.” – Copyright The Financial Times Limited 2018