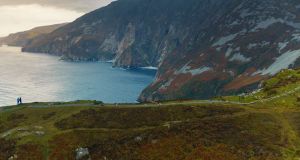 Sliabh Liag in Co Donegal, one of the locations featured in Fáilte Ireland’s ‘Keep Discovering’ campaign. 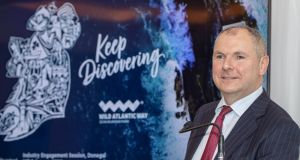 Fáilte Ireland is spending €6 million on a major new advertising campaign to encourage Irish people to holiday at home.

The campaign showcases more than a dozen locations across the Republic, including Lahinch in Co Clare, Sliabh Liag in Co Donegal, the Beara Peninsula in Co Cork, Birr Castle in Co Offaly and the Irish National Heritage Park, Co Wexford.

The main TV ad is directed by Brendan Canty, while singer-songwriter Lisa Hannigan narrates both the TV and radio ads, which are soundtracked by Dermot Kennedy’s song Power Over Me.

Fáilte Ireland director of marketing Niall Tracey said the majority of the revenues from staycations poured into areas outside Dublin, with rural communities often dependent on that business to sustain jobs.

“Tourism gets into every parish in the country. That’s the power of it. The economic importance of that domestic holiday to rural Ireland is huge,” he said.

Domestic tourism, or holidays taken in the Republic by people from the Republic and from the North, is worth €2.4 billion to the State.

But the authority’s research has found that while 92 per cent of people say they will take a holiday this year, only 56 per cent say they will do so at home. If that percentage rose to 58 per cent, the associated revenues would be boosted by about €96 million over three years.

Mr Tracey said there was an opportunity for staycations to win a higher share of the two- to five-day breaks that Irish people take “beyond the big holiday”, which for many will likely remain focused on getting “the sun on their back” in warmer climates.

Fáilte Ireland worked with creative agency Rothco and media buyers Mindshare on the campaign, which will run across television, online, radio and print, as well as appearing in cinemas and out-of-home locations.

The €6 million budget this year compares to a €4 million media spend in 2019, with the 50 per cent increase allowing Fáilte Ireland to spread its campaign out over 40 weeks rather than 26.

People are receptive to marketing prompts for domestic holidays over a longer period of the year than they are for overseas ones, because holidays at home tend to have a shorter advance booking period and they are also more likely than holidays abroad to take place outside the summer months.

The idea of “discovery” became central to the campaign after it was found to resonate with test audiences, Mr Tracey said.

“One of the reasons we go abroad is to discover new places. We all like the idea of new experiences and trying something new. Humans have always found this exciting and fun. We are conscious that it makes us more interesting people in a sense, because we have seen more things and have more stories to tell.”

Fáilte Ireland believes this same “social currency” factor can apply to holidays in Ireland as people discover “hidden gems” that may be on their doorstep.

The research suggested ads that emphasised the power of holidays to help people live their lives to the full, break their routines or spend quality time with their loved ones would not be as effective, Mr Tracey added.

“There is very little to dislike about tourism ads, but the danger is that they become like wallpaper. It’s very beautiful wallpaper, people like them, but it doesn’t necessarily change their attitudes or change their behaviour.”

The new campaign follows the development of the tourism “brand repertoire” of the Wild Atlantic Way, Ireland’s Ancient East and Ireland’s Hidden Heartlands.

Mr Tracey said “an awful lot” of the places featured in the ads were free.

“We’re not a cheap holiday destination ... we don’t compete there. We try to be good value for money,” he said. “But on any given holiday, you can’t be paying for everything.”

It is hoped that “Keep Discovering”, which also aims to increase the number of holidaymakers in the Republic from the North, will help offset expected post-Brexit pressure on tourism from Britain.