Some 3,000 gather for Pendulum Summit in Dublin

Two-day event will hear from Boris Johnson and Ruby Wax 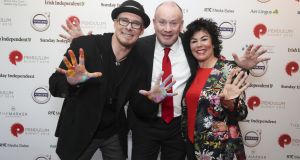 The two-day event is expected to attract a total of more than 6,000 delegates to hear speakers including Leinster rugby backroom coach Stuart Lancaster, US media personality Ruby Wax, and prominent UK politician and Brexiteer Boris Johnson, who is due to speak at the event on Thursday.

Also listed on the speaking roster for Thursday are the Aryzta and Paddy Power Betfair chairman, Gary McGann, and football executive and television star Karren Brady, who is vice chairman of West Ham United.

The event begun on Wednesday with a speech by US-based graffiti artist and motivational speaker Erik Wahl, who urged the crowd to unlock their creativity for business success.

Mr Lancaster’s presentation was themed on the “pursuit of excellence” and lessons he learned in his spell as head coach of England.

Clare-based cave diver Jim Warny, who took part in a high profile rescue of a Thai children’s football team from a cave last year, is due to speak later on Wednesday. Among those in attendance are recent presidential candidates Gavin Duffy and Sean Gallagher.

Last year, Mr Sheahan expanded the conference for the first time to New York, where it will return this September for another event.

1 Coronavirus: Notion of a rapid economic recovery is at best wishful thinking
2 Nice to see you: Which is the best video calling option around?
3 NTMA to raise billions of euro for State in bond sale amid Covid-19
4 Coronavirus: Journal Media to cut pay by up to 20 per cent
5 Will the coronavirus crisis rehabilitate the world’s banks?
6 Mother of invention: the new gadgets dreamt up to fight coronavirus
7 Mater hospital turns to robots to help in battle against Covid-19
8 Fierce backlash to Dutch hard line on eurobonds
9 Frontline bank workers to get pay top-ups during Covid-19 crisis
10 US authorities scrutinise Zoom’s practices as app’s traffic surges
Real news has value SUBSCRIBE

Irish people willing to share data to fight coronavirus 14:29
NTMA to raise billions of euro for State in bond sale amid Covid-19 13:23
Mater hospital turns to robots to help in battle against Covid-19 12:42
Will the coronavirus crisis rehabilitate the world’s banks? 12:36
British American Tobacco working on Covid-19 vaccine 12:30
Search executive
jobs on irishtimes.com