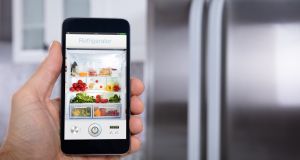 Smart fridges may enable viewing what you have in your fridge from an app. Photograph: iStock

Smart fridges have long been the go-to example of how the Internet of Things is going to magically eliminate all tiny annoyances from our domestic lives. What if your fridge both knew you were running out of milk and could just re-order it for you? You would never have to pretend to like black coffee again.

But the re-ordering fridge is still a fantasy in most kitchens of the world. Partnerships between smart fridge manufacturers and grocery retailers are conspicuous by their absence. Even the kind of smart fridge that is barely any fancier than a dumb fridge with a tablet device stuck on its door has yet to usurp the humdrum offline fridge in any meaningful way.

So where are they? The short answer is Las Vegas, where South Korean tech giants LG and Samsung began the decade by unveiling software updates to their existing smart fridge devices at Nevada’s annual CES consumer electronics show. Fridges are hot again – in Vegas, at least.

The latest devices are bestowed with artificial intelligence that can – and, let’s face it, will – suggest recipes based on the ingredients it knows to be both in the fridge and within their expiry dates. Surely any AI program will struggle to create much with a jar of pickles, the dregs of the ketchup and a quarter-block of cheddar, but tech companies are nothing if not ambitious.

The various smart fridge models tend to be smart in similar ways. If you’re too hungry to remember the contents of your fridge, their interior cameras will come to the rescue, showing you the miserable truth on a screen on the fridge door – or, rather more usefully, on an app you can check when you’re somewhere else and dreaming of dinner.

Smart fridges also tend to have speakers with Amazon Alexa or some other voice assistant built in, meaning you can talk to your fridge and your fridge can both talk to you and, if you’re nice to it, play some motivational music. Anything to get through the tedium of cooking.

That might not be all your future fridge plays you. Once a fridge has an internet connection, a screen and a voice assistant, it has all the potential it needs to become a multi-pronged advertising machine.

Google said as much back in a 2014 filing to the Securities and Exchange Commission, when it foresaw that in “a few years from now”, as smart devices gained traction in the market, “we and other companies could be serving ads and other content on refrigerators, car dashboards, thermostats, glasses and watches, to name just a few possibilities”.

We are more than “a few years” from 2014, obviously, but the idea of turning the household fridge from a humming food storage facility into a sophisticated terminal for grocery sales and marketing hasn’t exactly gone away. The advertising world has suffered some chills in its time, but what if a slice of it became 4 degrees Celsius by design?

The way grocery brands currently communicate with customers hovering forlornly by their fridge door is through product packaging. Did I have a good sleep? Why, yes, carton of Avonmore, I did, and thanks for asking. So how will smart fridges redraw the age-old battle to make consumers feel emotionally attached to particular versions of fairly homogeneous products?

Alan Coleman, boss of marketing company Wolfgang Digital, is among those wondering: Wolfgang’s ecommerce research indicates that voice commands only represent an infinitesimal portion of the total online searches that lead to paid ads. That could change.

But how much actual buying will ever be done by voice alone? For a technology to take off, it has to remove friction for our lives, not introduce it. If ordering groceries through voice commands to your fridge is even remotely similar to, say, the present-day tedium of coping with an automated telephone menu for an insurance company, Coleman notes, nobody’s going to be too keen.

“I don’t think anybody wants that experience in their kitchen,” he says. “Can you imagine doing your Tesco shopping that way?”

One thing properly smart fridges could do is allow owners to set them to re-order the lowest price products for certain categories of food, he adds. In theory, that might make grocery shopping smoother for consumers, but more complex for marketers dependent on the old emotion-toying tricks.

Whatever way smart fridges develop between now and 2030, or 2040, you can bet your last chilled beer the underlying aim will be to give technology companies a more active role in the grocery market. Interior fridge cameras are data gatherers, and that all-you-eat data will be there for big business to feast upon.

Does anyone really need a fridge to talk you through your lunch options? It’s not as if the rest of the internet is devoid of recipes. But such helpfulness won’t, ultimately, be the point. The point will be to slip in an ad for whichever brand has paid up to be promoted, then share your consumption data with whichever retailers want it most.

Supermarket layouts encourage shoppers to part with as much of their money as possible – that’s why the milk is always several miles in. Smart fridges will take that game into the home. You’ll be able to keep remote tabs on what your kids devour when you’re out of the house, but the price of this power will be some upstart piece of AI coming up with “recipes” when it should know very well it’s spaghetti carbonara again tonight.