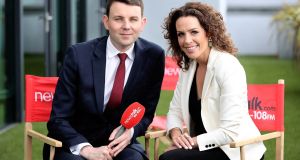 Sarah McInerney was only shifted to her current Saturday 8am slot in August, when the Drivetime current affairs programme she co-presented with Chris Donoghue was axed to make way for Ivan Yates. Photograph: Maxwells

Newstalk has confirmed Sarah McInerney will leave the station after less than four months in her current role. She will present her last show on Saturday, December 23rd.

The announcement is the latest in a period of unprecedented turmoil, controversy and change at the national commercial radio station and its parent company, Communicorp.

McInerney, a former Sunday Times journalist, was only shifted to her current Saturday 8am slot in August, when the Drivetime current affairs programme she co-presented with Chris Donoghue was axed to make way for Ivan Yates.

McInerney said she was looking forward to the future and was currently working on a book. “And between that and The Sunday Show on TV3, I can no longer commit to the weekly show at Newstalk,” she said.

“I’ve really enjoyed presenting the Saturday show and was privileged to work with many great colleagues at the station.”

Donoghue also announced his departure from his current job as Communicorp’s political editor on Saturday.

He will be taking up a position on Minister for Foreign Affairs Simon Coveney’s team.

The August reshuffle was widely criticised at the time as it left Newstalk with an all-male lineup of presenters in all weekday slots between 7am and 10pm.

Another female presenter, Dil Wickremasinghe, had her Saturday evening show, Global Village, cancelled in early October after she was critical of comments made by lunchtime presenter George Hook about rape and personal responsibility.

Donoghue had also criticised Hook, who was first suspended and then removed from his daily show. The lunchtime programme is now presented by Ciara Kelly.

Also in early October, Communicorp chief executive Adrian Serle told staff at all the group’s stations, which include Newstalk, Today FM, Spin 1038, Spin South West and 98FM, that they would not be inviting Irish Times journalists onto any of their shows because the newspaper had declined to apologise for or retract an opinion column by Fintan O’Toole, which was highly critical of Newstalk’s culture and gender imbalance.

The Broadcasting Authority of Ireland is currently seeking independent legal advice on whether Mr Serle’s directive is in breach of the terms of radio licences granted to Communicorp.

Donoghue’s three-month tenure as Communicorp’s group political editor was in succession to another short-lived appointment. His predecessor in the job, Gavan Reilly, had previously been Today FM’s political correspondent before moving to the Communicorp role in early 2017, but left in August to take up a role with TV3.

Today FM itself also lost one of its most prominent presenters at the weekend when comedian Al Porter resigned following allegations of inappropriate behaviour.

McInerney will continue to present her Sunday afternoon current affairs show on TV3.

Speaking about the announcement, Chris Doyle from Newstalk said: “On behalf of the team here in Newstalk I would like to thank Sarah for her hard work and commitment to the station and wish her every success in the future.”

Newstalk, which says a revised weekend schedule will be announced “in due course”, had previously announced George Hook would be returning with a new weekend show in December.

“ I think she’s a very good broadcaster. I thought she might take over from me, or Mick Clifford and Lynn Ruane I thought might be interesting replacements, but TV3 went another way.

“I wouldn’t be surprised if Sarah ended up presenting the programme I used to present. I think that two presenters is a bit awkward and they’re not necessary. I think they get in each other’s way.” Browne was speaking at an event organised by the charity, Alone.