Deja vu as France beats Ireland to another prize 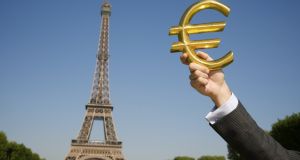 It was deja vu all over again on Monday evening as Ireland found itself losing out to France for the second time in less than a week to France. Only this time you can’t blame the Scots or the Welsh.

Ireland, home of Europe’s worst banking crisis, set its sights quickly after the Brexit vote last year on luring from Canary Wharf in London one of the very agencies set up to deal with the turmoil.

While the six-year-old European Banking Authority (EBA) has a staff of only 167 people, the Government’s hope had been that securing the institution for Ireland might help persuade more UK-based financial institutions to move activities to Dublin post-Brexit.

After all, we’ve already seen a number of major banks – including Morgan Stanley, Standard Chartered and Nomura – select Frankfurt as their new EU hubs, clustering around the European Central Bank, which took over the regulation of euro-zone banks three years ago. The EBA sets standards, co-ordinates supervision across the wider EU and runs banking stress tests that take place across the region every two years.

Wounded last week by its failure to secure the 2023 Rugby World Cup (when France won out after Wales and Scotland abandoned Ireland in the penultimate round) the Government pulled Dublin on Monday morning from a list of 18 cities bidding to host the European Medicines Agency to focus on the narrower field of eight cities vying for the EBA as EU ministers gathered to both on the post-Brexit locations for both UK-based agencies.

It looked at teatime that the tactic had paid off, as Dublin entered the final round for the EBA against Paris, at 13 votes to 10, and Frankfurt, at 4 votes, was eliminated. Paris, whose 22-page glossy pitch highlighted its “vibrant cultural scene” and “second-to-none” recreational facilities, ended up being pulled out of a hat as both ended the third round tied.

Still, the EU’s chief Brexit negotiator offered Dublin a glimmer of hope on Monday of attracting financial activities from London before its divorce with the UK goes through in March 2019. The EU’s Brexit negotiator, Michel Barnier, moved to kill off any lingering speculation that Britain will be able to benefit from some sort of special deal that will afford it continued access to the single market.