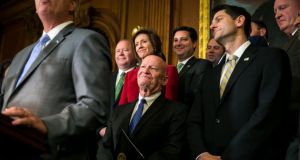 It may be the first step in a legislative process that has some way to go, but Thursday’s vote by the US House of Representatives in favour of a tax overhaul is highly significant.

Despite scepticism about Speaker Paul Ryan’s claim that the House would endorse a package by Thanksgiving – that’s next Thursday, November 23rd – in the end it did so, and with a comfortable margin. All Democrats voted against, as expected, along with 13 Republicans, mostly from high-tax states like New York and New Jersey, whose constituents will be adversely affected by changes to local- and state-tax deductions.

The next battle will be in the United States Senate. Its finance committee agreed its changes late on Thursday night, setting the stage for a full vote in the coming weeks. Here Republicans have a tougher task. Because they control only 52 seats in the 100-seat chamber, they can afford to lose just two votes – Vice-President Mike Pence holds the casting vote.

The deepening sex scandal involving the Alabama Senate hopeful Roy Moore is also a worry. Should he lose the election on December 12th, Republicans would be down a seat in the Senate.

Although many of the negotiations as Republicans merge the House and Senate plans will be about the changes to individual tax arrangements, such as the Senate’s proposal to abolish the Obamacare requirement for all Americans to hold health insurance, most in the party are united behind reforming the corporate-tax system (although the Senate’s proposal to delay the implementation of a 20 per cent corporate-tax rate for another year is likely to be a point of contention).

This is unsettling for Ireland. Addressing the House this week, Paul Ryan – a proud Irish-American – cited the example of Johnson Controls, a company that has had roots in his home state of Wisconsin since the 1880s but is now based in Ireland. The new tax system will help make the United States “the most competitive place in the world”, he said. Worrying words for Ireland.