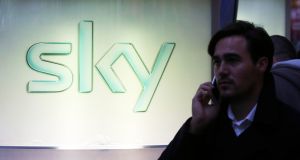 Sky is the largest pay-TV company in Ireland, where it also sells broadband and telephony services. Photograph: Chris Ratcliffe/Bloomberg

The British government has referred Rupert Murdoch’s planned £11.7 billion (€13.5 billion) takeover of European pay-TV group Sky to regulators to decide if the deal is in the public interest.

UK media secretary Karen Bradley said it was important to seek advice from the regulator Ofcom on whether the deal would give Murdoch and his companies too much control of Britain’s media, and whether the new owner would be committed to broadcasting standards.

Murdoch and his family have long coveted full control of Sky, despite the damaging failure of a previous attempt in 2011 when their British newspaper business became embroiled in a phone-hacking scandal. Bradley has given Ofcom a 40-day timetable to investigate, and expects to receive its report by May 16th. She said Ofcom, as an independent regulator, would assess in the same time-frame whether Murdoch’s company was a “fit and proper” holder of a broadcasting licence.

Twenty-First Century Fox said it was looking forward to working with British authorities in their reviews of the deal, and it believed it would be approved.

Some opposition politicians oppose the deal, saying Murdoch, the owner of The Times and The Sun newspapers, would wield too much influence if he had full control of a pay-TV group present in more than 12 million British and Irish homes. “Many of us believe if you look at the conduct of the Murdochs and the untrammelled power they already have it is not in the public interest for them to take over Sky and have full control,” Ed Miliband, former leader of the opposition Labour Party, said. Miliband was a prominent critic of the deal the last time it was proposed.

Murdoch’s son James, who is chief executive of Fox and chairman of Sky, was criticised by Ofcom in 2012 over his handling of the phone-hacking scandal. The regulator said his management of the group’s UK newspapers at the time “repeatedly fell well short of the conduct to be expected of as a chief executive and chairman”, although it said Sky remained a fit and proper owner of broadcast licences.

Twenty-First Century Fox, which owns cable, film and pay-TV assets around the world, said the media market had changed dramatically in recent years as broadcasters face new challenges from streaming services. The Murdoch family’s newspaper businesses have been split from its television and film assets in a move that helped pave the way for another tilt at Sky.

Sky has also combined its businesses in Britain, Germany and Italy since the previous bid. James Murdoch has sought industry backing for the deal by recently praising the quality and creativity of British television and the positive contribution made by Sky.

Rupert Murdoch has several interests in the Irish market. Sky is the largest pay-TV company in Ireland, where it also sells broadband and telephony services. It employs 850 people in Dublin and operates 36 Sky retail units as part of its push to recruit new subscribers. Sky Media, its advertising sales division, also sells advertising on behalf of 35 channels in the Irish market, including channels owned by other media groups such as Viacom, Discovery and UKTV. Together, these channels are estimated to have more than 20 per cent of the Irish advertising market.

Murdoch’s News Corp, which split from 21st Century Fox in 2013, has a significant presence in Ireland, where it publishes The Sunday Times and a local digital edition of The Times. It also owns Storyful, the social media news agency founded by Mark Little, which it bought in 2013 for €18 million, and Wireless Group, which it acquired last year.

Wireless Group is the former radio holdings of Belfast-based UTV Media. Although its main asset is London-based TalkSport, the group also includes six radio stations in the Republic – FM104 and Q102 in Dublin, LMFM in Louth and Meath, Cork’s 96FM and C103, and Live95FM in Limerick – as well as Belfast’s U105.8FM.