Ardmore and Troy team up to lure major movie projects 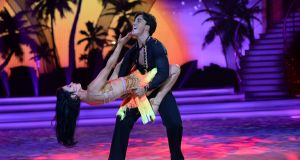 Jake Carter and Karen Byrne in RTÉ’s successful series Dancing with the Stars, which is made in Ardmore Studios. Photograph: Cyril Byrne

Ardmore and Troy Studios are planning a joint sales and marketing strategy following the takeover of the Bray location by some shareholders in the Limerick venture.

However, the two studios will continue to operate as standalone entities.

Ardmore has seven sound stages – the largest of which is 15,000sq ft. The Troy business has another three studios, all of which are larger than that. The biggest offers 70,000sq ft of space and 55ft of height.

The two locations account for over half of all studio space in the country.

“Up until the last few weeks, there were kind of two separate businesses,” said chief executive Siún Ní Raghallaigh. “Now they’re coming under a new arrangement, they’re synergies. I’m not saying they’re merging into one, but they’re definitely synergies that make sense to look at.”

Ms Ní Raghallaigh, who has been chief executive of both studios for the past couple of years – and is a shareholder in the Troy operation – will continue in that role.

“It’s more an operational thing from my perspective. I see that I now have 10 stages to sell. There could be a feature film, for example. If you were talking about a large-scale feature film, they might decide to locate in both studios just to have all the space. So those are things that we could never do before. So there’s a joint sales and marketing that can happen now.”

Having originally announced that it was linking up with well-established British studio Pinewood on global sales and marketing to attract international bookings, Troy backed out of the arrangement before it opened. It now has its own people on the ground in both London and Los Angeles.

The plan is to use these resources to market space at both Troy and Ardmore.

Ms Ní Raghallaigh and Ossie Kilkenny, one of the major investors in Ardmore for many years, spearheaded the creation of Troy amid demand from Irish and international film-makers for larger stages.

Now a group of Troy investors, fronted by studio chairman and Ion Equity co-founder Joe Devine, have acquired Ardmore, Ireland’s oldest studios, for a sum understood to be in the region of €6 million.

That was a fraction of what the studios were reported to be worth when the sale was first mooted. Ardmore studios has returned to profitability at that stage, having come close to closure in 2012.

Deteriorating relations between Mr Kilkenny and his business partner Paul McGuinness – both for many years synonymous with the backroom team for U2 where they first met – meant it was put up for sale. However, despite a rising property market, Ardmore failed to attract bids from international buyers.

1 We are ‘sale agreed’, but can we go back with a lower offer?
2 Working from home: New costs, new stresses and little relief
3 Eason to lay off 150 staff as it prepares for June reopening
4 Joint accounts: if one of us dies, can the other access the money?
5 ESB shelves plan for €500m electricity generator at Poolbeg
6 HSBC board rethinks overhaul and seeks even deeper cuts
7 Ryanair almost certain to oppose German government’s bailout of Lufthansa
8 Covid-19 has turned the volume up on musicians’ cut from streaming
9 ‘Over 1,000’ pubs have interest in Covid-19 insurance test case
10 Restaurants and gastropubs hope to avoid a dry reopening
Real news has value SUBSCRIBE

Liberty Global chief executive due as much as $123m in compensation 10:09
FBD says 700 claims received over Covid-19 interruption 09:41
Belfast-based Kainos sees annual revenue, profit rise 09:21
Aryzta’s revenue falls 24% as pandemic hits business 08:14
Joint accounts: if one of us dies, can the other access the money? 07:23
Search executive
jobs on irishtimes.com