Who are the Independent News & Media 19? 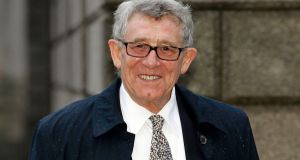 The Data Protection Commissioner is examining an alleged data breach at Independent News and Media in 2014 involving information on the company’s server being copied and provided to IT specialists outside the group, who reconstructed the data so it could be “interrogated”.

The Director of Corporate Enforcement, who is investigating this and other matters at the company, has told the High Court that 19 “persons of interest” were the focus of the data breach. The following are short profiles of these individuals.

A former chief executive of INM’s Irish division, Webb, from Ballyhaunis, Co Mayo, left the company in 2013 after almost 20 years.

He joined INM as a chartered accountant, working in the finance section before moving to the advertising section. He had been chief executive of the company’s Irish operation since 2009.

He left to join Dunnes Stores as chief financial officer before moving on again in 2016 to media and advertising group Dentsu Aegis Network where he became chief operations officer.

O’Connor, a native of Co Cork, is a prominent Irish journalist who currently holds the role of deputy editor of the Sunday Independent. He is also a television presenter, with roles on RTÉ programmes, Cutting Edge and, formerly, The Saturday Night Show.

Sheehan is also a journalist with the Sunday Independent. She covers a broad range of topics including crime and social affairs. Recently, she has written extensively on the issue of Russian oligarchs with substantial investments in the Republic.

Jacqueline O’Brien is a senior counsel who represented the Moriarty Tribunal, which was established in 1997 to look into the financial affairs of former taoiseach Charles Haughey and former Fine Gael communications minister Michael Lowry. The tribunal’s final report was published in March 2011. It found Lowry “secured the winning” of the State’s second mobile phone licence competition for businessman Denis O’Brien’s consortium Esat Digifone.

It also found Denis O’Brien made payments to, and supported a loan to, Lowry and that the transactions were “demonstrably referable to the acts and conduct of Mr Lowry”. The two men have said the tribunal was wrong in its findings.

Healy also worked as a senior counsel for the Moriarty Tribunal. Efforts to damage his reputation and thereby call into question the tribunal’s independence were denounced as “opportunistic and reprehensible” in its final report.

It strongly criticised Denis O’Brien for alleging Healy was in a position of “potential conflict and bias” due to work undertaken on behalf of one of the losing consortiums, which bid for the licence – Persona Digital Telephony.

The issue was pursued with “venom” in correspondence and via the internet, according to the report. Healy was the highest paid lawyer at the tribunal, earning €9.6 million.

He won an award in 1997 for his exposure of a political scandal that led to the resignation of government minister Michael Lowry. He revealed that businessman Ben Dunne financed an extension to Lowry’s home.

Smyth has also worked for Today FM, which is owned by Denis O’Brien’s Communicorp. His show was dropped in 2011 after 14 years. Smyth had been a vocal commentator on matters related to the Moriarty Tribunal, and was critical of Denis O’Brien.

A former journalist, Godson is currently a financial/strategic communications adviser in London. Godson’s career as a journalist included a stint as business editor of The Sunday Times. He left journalism after 17 years to become a PR advisor to Goldman Sachs in 2002. He left that role after just a year to set up his own financial PR consultancy.

Brophy is the founder and chief executive of PR firm Red Flag. He was formerly an INM communications executive.

Denis O’Brien is currently embroiled in a conspiracy defamation case against Red Flag, which he alleges was involved in a 2015 conspiracy to damage him in the run-up to a planned flotation of Digicel, his telecommunications firm. It operates in 31 markets across the Caribbean, central America and the Pacific islands.

He is also vice president of the Irish Chapter of the Irish Australian Chamber of Commerce, and a trained chartered accountant.

* Buggy is a former chief financial officer with INM. He stepped down in 2012, four months after he was voted off the board of the group. Denis O’Brien, the group’s largest shareholder, voted against his retention.

Since his departure from INM, Buggy has been group finance director with Ornua. Prior to joining INM, he worked as an audit manager with PwC. He received a bachelor of commerce degree from University College Dublin.

James Osborne, who died aged 68 last year, was a former chairman of INM. He was also ousted from the board at the 2012 annual general meeting when Denis O’Brien voted against his re-election.

Osborne was a Ryanair director and former managing partner of A&L Goodbody solicitors. He was a native of Co Donegal, and a highly respected figure in Irish corporate and legal circles.

As well as being the senior independent director at Ryanair, Osborne was also chairman of the bookseller Eason. He sat on the boards of Australian-listed company James Hardie Industries and Oneview Healthcare.

Osborne gained public prominence during his nine month stint as chairman of INM while it was at the centre of a bitter battle for control between Denis O’Brien and Tony O’Reilly.

Scott worked at INM for almost 24 years and was a former personal assistant to the company’s former chief executive Gavin O’Reilly. She is currently executive office manager with Red Flag.

Kenny is a senior managing director of FTI Strategic Communications practice, which worked with INM a number of years ago.

Based in Dublin, Kenny is also a co-founder of K Capital Source, which was acquired by FTI in December 2007. He has more than 20 years experience in financial and capital market communications, governance and corporate finance.

He was previously executive vice president with Jefferson Smurfit Group (JSG), which is now Smurfit Kappa Group. He worked with investment bank NCB prior to joining JSG in 1995.

Neilan is a managing director of FTI Strategic Communications, and was also a co-founder of K Capital Source.

A senior associate with FTI Strategic Communications for four and a half years from January 2008, Mansergh is currently a senior account lead in media and entertainment for Google’s customer sales division. Inbetween, she has worked for Slattery Communications and PSG Communications.

Cooper has worked as group general counsel and company secretary of British multinational telecommunications company Cable & Wireless, which has a market leading position in the Caribbean and Latin American region. He has previously worked with JD Wetherspoons, Asda, and the Sage Group.

Healy is a former head of group treasury at INM.

It is suspected that Andrew Donoghue should in fact read “Andrew Donagher”, who is a former company secretary at INM.

Donagher, a certified public accountant, was previously group financial controller of INM, a post he held for five years before his appointment as secretary in 2002. He joined INM from Somers & Associates, where he worked as a partner.

* This copy was edited on April 12th