Advertising shifts to direct targeting of a demographic’s eyeballs 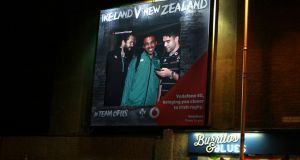 The “video wall” constructed by Kinetic for rugby sponsor Vodafone in November 2016: a large digital screen attached to a traditional Dublin billboard showed exclusive footage of the Irish team.

Goodbye, paper and paste? Digital out-of-home advertising has enjoyed “exponential” growth in recent years, and now accounts for about 15 per cent of total out-of-home ad spend in Ireland. But as that percentage suggests, there is still far, far more to come.

Out-of-home media agency Kinetic held an event in Dublin last week to explore the ways in which the advertising we encounter on the streets, and in rail stations and shopping centres, is evolving.

“We have seen more and more technologies becoming accessible and mainstream,” Kinetic Ireland chief executive Simon Durham told the Moving Minds seminar in Dogpatch Labs. Like every other form of media, out-of-home is “undergoing major change”.

Kinetic recently partnered with a company called ad2one, using a location intelligence platform called Near, to “geo-fence” out-of-home sites and some “young, urban hotspots” for a Coca-Cola campaign. When the target audience entered within a certain radius of the sites or hotspots, they were served a mobile display Coca-Cola ad – “win a Coke mini projector” – once they were in-app.

Marketers in Ireland now have several options available to them if they fancy marrying the brand awareness potential of out-of-home with the kind of “buy now”, “enter this competition” or “register here” calls-to-action facilitated by mobile.

The natural link between out-of-home and mobile is obvious, but here it is: out-of-home advertising is consumed while on-the-go, while people on-the-go don’t just have their phones in their pockets, they are unapologetic “smombies” (smartphone zombies) staring right at them in their hands.

Hudson also gave a shout-out to beacons, whereby devices can alert apps or websites, to which the user has opted-in, whenever they arrive at or leave a location. Pushing timely, relevant messages is again the name of the game.

Using Snapchat is another option. Last October, billboards in US subway stations showed a large snap code and the line “What happened that night?” When intrigued Snapchat users scanned the code, they found it was an ad for the film The Girl on the Train (in which Emily Blunt suffers from alcohol-related blackouts).

While this works on the same principle as QR codes, Hudson noted, it doesn’t require the consumer to download a new app – it merely targets the youthful audience that is already Snapchat-literate.

The Irish advertising industry has been advocating for greater digitisation of out-of-home sites for some years now, and has seen some – limited – progress of late. For example, JC Decaux’s new five-year contract for National Transport Authority bus shelters includes the installation of roadside digital screens, subject to planning permission. In Belfast, large-format roadside digital screens are already available to advertisers.

PricewaterhouseCoopers has forecast that 42 per cent of global out-of-home ad spend will be digital by 2020, which will take the market to $18.3 billion. PwC also predicts that over this period the static or “classic” market will be flat, albeit at about $25 billion.

“All of the growth is being driven by digital,” said Geoff Fitzpatrick, founder of digital out-of-home screen network Orbscreen. The industry has moved from analogue to digital to connected, and then on to the point where it can effectively gather intelligence.

“Digital out-of-home networks are becoming more and more about data accumulation,” said Fitzpatrick. It’s a “reversal” of the flow of the information that has him excited, notwithstanding the fact that the marketing business is no stranger to hot air. “Sincerely, in my opinion, this is the real deal.”

Soon, advertisers will be able to migrate from buying a quantity of ad panels for a fixed period of time to instead saying “I want to buy 250,000 female eyeballs, aged 25-40, in Dublin.”

Because the data is anonymised and the technology based on opt-ins, Kinetic doesn’t envisage that the advertising industry’s “wings will be clipped” by new EU data protection regulations, but it will have to be mindful of the rules on how data is stored and transferred.

Meanwhile, research commissioned by Kinetic from Kantar Millward Brown has used facial coding to gauge how audiences interact with digital out-of-home advertisements, measuring the “pre-conscious” responses of 400 people in Dublin to digital and static ads.

The digital variety scored higher on recall. But the moment-by-moment analysis revealed a potential creative pitfall. The most engaging ad campaign was based on humour, said Kantar Millward Brown’s senior client director Sonya McGuirl, an advertising research expert. However, in the digital formats, the punchline was only on screen for about two seconds.

“The digital humour was too fleeting, and when it moved away, we saw frowns.” Sometimes there just isn’t enough time to read the joke.