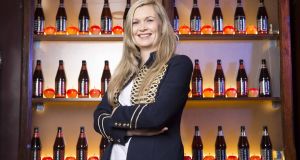 Bulmers has ditched all references to “time” in a major revamp for the Irish cider brand designed to make it “more modern and relevant” to younger drinkers.

A new television advertisement discards the traditionally slow, nostalgic feel of its past campaigns and replaces it with a humorous and youthful house party scene, concluding with the message that Bulmers is “100 per cent Irish cider”.

The ad, which will be on air from St Patrick’s Day, is part of a €10 million marketing investment by Bulmers owner C&C. This is double what it spent promoting the cider last year.

C&C has hired London creative agency Lucky Generals, known in Ireland for its work on Paddy Power, to oversee the shift to an “edgier” brand direction, which also includes new packaging.

“This is Bulmers moving on, definitely,” said Belinda Kelly, marketing director for the brand.

The cider, founded in Clonmel by William Magner in 1935, has often used the concept of time in its advertising, with taglines including “Nothing Added But Time”, “Time Dedicated to You” and more recently “This is Our Time”.

“We feel we have spoken enough about time,” Ms Kelly said.

She added that the new campaign would be “more appropriate” to the lives of Bulmers drinkers, the majority of whom are 18-34-year-olds, and help ensure the brand is “top of mind” for drinkers in an ever more competitive market.

“Bulmers has always been more about evolution, and a tweaking of the brand. The brief this time was to do something revolutionary.”

Ms Kelly said the new campaign, which will also include out-of-home and digital advertising and festival sponsorships, keeps Irishness at the core of the Bulmers brand identity, despite the radical makeover.

“It’s from the ordinary, everyday things in life that we derive so much of our humour in Ireland,” she said.

Bulmers Original bottles are now a lighter copper colour, “inspired” by the warm tones of the Clonmel-produced cider itself, while the cider vats motif is more subtly represented in the cleaner, linear design of the label.

C&C has also launched Outcider, a “sister brand” that follows a trend in the cider category by being a sweeter drink than its “big brother”. Outcider, which boasts label artwork by Dublin graffiti artist James Earley, is aimed at “street smart” people who “don’t mind standing out from the crowd”, according to the company.

After a decline in 2015, the cider category grew 6.5 per cent in Ireland in 2016. Bulmers is the number one brand, with an 86 per cent share of the on-trade market (pubs and restaurants) and 47 per cent of the off-trade market. In recent years, however, new rivals such as Heineken’s Orchard Thieves have successfully won market share.

It is estimated that one in five adults in Ireland drink cider, which represents 13 per cent of the total alcohol market.