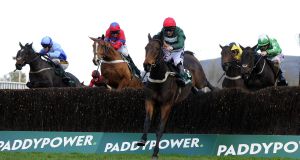 Paddy Power will sponsor UK horse racing on TV3 and 3e this year in a one-year deal covering key festivals such as Cheltenham, Aintree, Epsom and Royal Ascot.

The bookmaker’s sponsorship is worth a “significant six-figure deal”, TV3 Group said, while Paddy Power will have first rights to renew the sponsorship for 2018.

TV3 Group signed a four-year deal with the UK’s Racecourse Media Group (RMG) in December for the Irish television rights to 50 race days each year. Certain race meetings from Newmarket, Newbury and York are also included in the package.

Television rights in the UK had been long-flagged to make a move from Channel 4 to ITV and ITV4 at the start of 2017, meaning many Irish viewers would have lost access to coverage of certain meetings if TV3 had not picked up the rights.

The deal also means big races that had been shown on RTÉ such as the Cheltenham Gold Cup and the Aintree Grand National will be broadcast in Ireland on TV3 for the next four years.

TV3 Group, which is owned by Virgin Media, plans to spread the coverage across its main channel and 3e.

The deal, which covers broadcast and digital sponsorship of UK racing on both channels as well as live streaming on 3Player, will begin this Saturday with the Cheltenham Festival trials day on 3e from 12.45pm.

Paddy Power, director of communications for Paddy Power, said horse racing “had never failed to capture the imagination of the Irish public” and that the bookmaker looked forward to working with TV3.

Virgin Media Solutions head of sales Paula McCarthy said securing the exclusive terrestrial rights to UK horse racing for the next four years had been a “major coup” for TV3 Group and that sport would continue to be a “big focus” under its new three-channel strategy. The group also owns the channel Be3.

Its racing deal came on top of its swoop in late 2015 to secure Six Nations rugby rights from 2018.

Meanwhile, the Irish sponsorship market is expected to grow 6 per cent to €173 million in 2017, according to figures from specialist sponsorship agency Onside. Last year, the market grew 9 per cent – ahead of expectations, to an estimated €163 million, Onside said in its annual review.