Irish companies plan to spend more on marketing in 2017 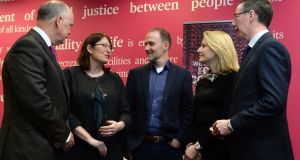 Three in 10 Irish companies plan to increase their marketing budgets in 2017, while only 7 per cent plan to cut theirs, according to a survey by media agency MediaCom Ireland and The Irish Times.

Almost two-thirds plan to invest the same amount in marketing in 2017 as they did last year, the survey of 209 marketing decision-makers found.

MediaCom Ireland chief executive Peter McPartlin, speaking at a briefing to the marketing industry in The Irish Times in Dublin on Thursday, said the results of the research were encouraging, given the stress many companies were under.

The survey was designed to identify the challenges facing the marketing industry “beyond the ‘B’ word and the ‘T’ word”, Mr McPartlin said, referring to the economic uncertainties posed by Brexit and the election of Donald Trump.

Some 37 per cent identified price-cutting pressures as a particular concern, while 26 per cent expect new Irish competitors to affect their business and 21 per cent cited competitor innovation as a challenge. For 19 per cent, new global competitors were a “pinch point”.

Among the companies that indicated they would spend more in 2017, four-fifths plan to invest in their website or ecommerce functions, while about half plan to increase their advertising budgets.

Social media channels were the clear favourite for further advertising investment and were cited by 74 per cent of those companies that plan to spend more. The next most popular was online search advertising, which was mentioned by 39 per cent.

Respondents to the survey included marketing directors, brand managers and finance directors, with the research conducted by iReach in December.

Speaking at the event, Brian Keating, group propositions and brands director for AIB, said “quantity versus quality” would be a big theme for marketing in 2017.

The industry risks damaging its reputation if it bombards consumers with “awful” advertising, he said. “There is a lot of stuff out there that I would call electronic junk mail.”

Orlaith Blaney, who was appointed group head of brands and marketing for Irish Water company Ervia last year, said marketers had to take a lead in helping their organisations rebuild trust.

“We have a really challenging job in getting customers to believe us, hear us, listen to us,” Ms Blaney said.

Irish Water is a complex business, one on which industries from Guinness to Coca-Cola depend, and there is “absolutely a story to be told” about the job it does, she said.

Aedamar Howlett, Coca-Cola’s marketing director for Britain and Ireland, said the soft-drinks category had been unfairly attacked as the “poster boy for sugar”, but that Coca-Cola would continue to invest in advertising “in all of its guises” to get its message across.

“For us, it is about investing – and I use that word very purposefully – where the eyeballs are, but also where consumers are engaging with us.”