WPP predicts tougher 2017 after slow start to the year 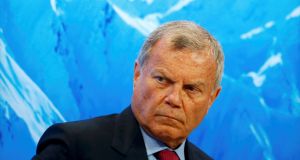 WPP, the world’s largest advertising group, said it had seen a relatively slow start to 2017 and would plan conservatively for the year ahead after hitting its 2016 target for net sales growth.

The group, run by high-profile businessman Martin Sorrell, reported that 2016 like-for-like net sales were up 3.1 per cent but said its key sales measure was up just 1.2 per cent in January.

“Given continued tepid economic growth and recent weaker comparative net new business trends, the budgets for 2017, on a like-for-like basis, have been set conservatively at around 2 per cent for both revenue and net sales,” it said.

WPP said it would target a headline operating margin improvement on net sales of 0.3 margin points, in constant currency. The world’s four biggest advertising groups – WPP, Omnicom, Publicis and IPG – tend to track wider economic growth, and WPP’s 2017 forecast of 2 per cent growth is below analysts’ expectations for the company.

1 Coronavirus: Construction sector most significant part of new shutdown
2 British exceptionalism backfires in style as Johnson tests positive for coronavirus
3 Wetherspoon’s panto-villain chairman may have the last laugh
4 Remote working doesn’t suit everyone, and it exposes woolly leadership
5 Volkswagen burning through €2bn in cash per week
6 UK needs to be honest about its Covid-19 strategy
7 Mobile, broadband suppliers to be given extra radio spectrum
8 Can husband keep savings and half the house in divorce?
9 Interim examiner appointed to food distribution companies
10 Usit travel group in liquidation due to coronavirus crisis
Real news has value SUBSCRIBE