AIB limbers up for third year of ‘Toughest Trade’ 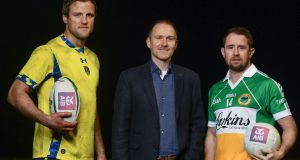 Sports swap television show The Toughest Trade is back on RTÉ2 tonight at 9.30pm, but the GAA-themed format is not like most other RTÉ shows. The two-part production, paid for by AIB and devised by its creative advertising agency Rothco, is part of a much wider, multiyear marketing campaign by the bank.

In tonight’s programme, viewers will see Donegal footballer Michael Murphy tested to his limit as he joins rugby side Clermont Auvergne. In return, former Welsh rugby player Shane Williams will tackle life as an amateur with GAA football club Glenswilly.

“The challenge with hurling every year is swapping it with a sport that is vaguely compatible,” says Brian Keating, AIB’s group propositions and brands director.

Lee Chin did have a go on skates a few times before travelling to Canada, so he wouldn’t be “a complete novice on the ice”, Keating adds. “I think it is going to be a particularly challenging trade, of all the trades we have done so far.”

The Toughest Trade is in its third year, having extended from a one-off documentary on TV3 in 2015 to a two-parter on RTÉ2 last year. Made by Motive Television, its budget and production values are somewhat above average for an RTÉ2 documentary, and this, combined with the effective format idea, has helped it win acclaim from viewers.

The bank could spend “a few hundred thousand” on the production of a 30-second commercial, but then it would also have to pay for airtime for the campaign. The alternative is to agree a deal with RTÉ and make what is known in the television industry as advertiser-funded programming. The episodes will later be repeated by RTÉ and added to YouTube.

“Overall, we find that it is incredibly economical for a strong brand message,” says Keating. It has not yet committed to making more episodes, “but it is the sort of thing we have to think about very quickly”.

With a show reel of five episodes, it is now easier to approach professional sporting organisations across the world about participating in a “swap”, he says.

The title plays on “The Toughest”, a tagline used by AIB to reinvigorate its sponsorship of club football in 2013. Such is its success that the social media hashtag #TheToughest is now often used by GAA fans with no connection to the bank.

The way the bank has managed to leverage its GAA deals is rated highly within the Irish industry, and later this month AIB will become the first Irish brand to speak on the main stage of sponsorship conference IEG in Chicago.

The bank says its relationship with the GAA has boosted its brand across local communities, and among the “mums and dads” who keep clubs going.

“Sometimes you have to go out and remind yourself of how passionate people are about it,” says Keating. “It touches every community, which is great for us as an organisation.”