Meath builder has €1.6 million of debt written off 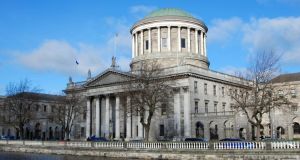 The High Court was told Start Mortgages would receive 35 cent for every euro of debt owed under the personal insolvency arrangement but 31 cent in the euro if former builder Eugene O’Connor was made a bankrupt.

A former Meath builder has had debts of €1.6 million written off in a personal insolvency agreement approved by the High Court that will keep him and his wife in their family home.

Eugene O’Connor, who ran a small building company in Navan, remortgaged his four-bedroom home – acquired in 1982 – twice during the Celtic Tiger years, in 2005 and 2007, to fund his business and to buy an investment property.

The property crash and recession left him in financial difficulties, nursing debts of almost €2.3 million when he sought a debt rescue plan under the personal insolvency regime last year.

In a personal insolvency arrangement (PIA) praised by Mr Justice Mark Sanfey, Mr O’Connor’s mortgage of almost €1.9 million will be written down to €650,000 on an interest-only term of 30 years at a tracker rate of 0.8 per cent, amounting to a monthly repayment of €433.

The arrangement, devised by Co Waterford-based personal insolvency practitioner Mitchell O’Brien and presented in court by barrister Keith Farry, determined that the 62-year-old former property developer was not eligible for the State’s mortgage-to-rent scheme.

This scheme keeps insolvent mortgage holders in their homes by switching from owning to renting their properties from a housing association which buys the property from a lender.

The PIA found that Mr O’Connor and his wife would not meet the criteria for a trade-down mortgage because of their age. The likelihood of the couple securing social housing in Co Meath was “remote given the current numbers on the waiting list for social housing”.

The couple, who have four adult children, would not be able to afford open market rent, according to the PIA presented in court.

Mr Justice Sanfey described the approach taken by Start Mortgages, the lender in the case, as pragmatic and realistic based on the level of debt and limited options available.

The court was told that the mortgage lender would receive 35 cent for every euro of debt owed under the PIA but 31 cent in the euro if Mr O’Connor was made a bankrupt.

Some €1.2 million is being written off his mortgage. A further debt of €410,000 to personal debt lender Cabot Financial Ireland will be written off in the arrangement.

The couple had a monthly household income of just €2,443 and, based on their income and age, capital mortgage payments were not considered possible in the case.

The State’s personal insolvency regime was introduced after the financial crisis in order to reduce unsustainable mortgage debt of up to €3 million for heavily indebted people in long-term mortgage arrears and to find ways of keeping people in their family homes.

Last week, the court blocked another potential debt-resolution mechanism, a debt-for-equity swap where a lender exchanges part of their debt for part-ownership of the home. This option is thought to be a potential resolution for thousands of insolvent debtors close to retirement age.

In a ruling in what was regarded as a test case, Mr Justice Denis McDonald said that the court could not approve such a solution unless the relevant lender provides their consent.

Significant amendments to the insolvency laws were required if arrangements such as “debt-for-equity swaps,” where consent is not provided, were to be approved by the courts, he said.

1 Should my mam wait for house prices to drop before buying?
2 Cheers: Conor McGregor's whiskey races up the sales chart
3 Joint accounts: if one of us dies, can the other access the money?
4 Two prominent business leaders in planning row with neighbour
5 US ‘hard seltzer’ drink White Claw launches in Ireland
6 Global stocks climb near three-month highs as rebound hopes grow
7 ‘I’m so lucky to be in the Caribbean – a million miles from Derry Girls’
8 Why we’re about to learn if we are really in the A-team
9 EU promises billions to help companies weather the impact of Covid-19
10 Start-up offers easy way to donate your digital change to charities
Real news has value SUBSCRIBE