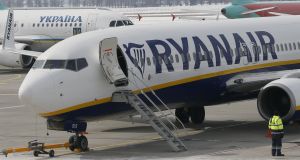 Ryanair rose 4 per cent to close at €11.57 as analysts concluded it was better placed to weather a shake-out than its rivals.

An early recovery proved short-lived for European shares on Tuesday with no end in sight to the coronavirus outbreak, as a jump in infections across the bloc unsettled investors already reeling from the oil price crash. The Iseq in Dublin fell 0.65 per cent.

London’s blue-chip index also gave up strong gains from earlier in the day to end marginally lower as optimism around stimulus measures by major central banks was overshadowed by heightened coronavirus fears in Sweden.

Airline stocks rose between 0.2 per cent and 4 per cent after the European Union, in a move to give airlines more breathing space amid headwinds from the coronavirus, said it would suspend a rule requiring carriers to run most of their scheduled services or else forfeit landing slots.

Ryanair rose 4 per cent to close at €11.57 as analysts concluded it was better placed to weather a shake out than its rivals.

Dalata, the State’s largest hotel group, fell another 8.8 per cent to €3.01, as hospitality operators continued to feel the brunt of investor angst over coronavirus.

Applegreen fell by 5.4 per cent to €4.33, as forecourt retailers look set to suffer from less traffic on the roads as increasing numbers of people work from home.

The commodity-heavy FTSE 100 was down 0.1 per cent, after falling to its lowest level since 2016 on Monday following a crash in oil prices with the eruption of a price war between Saudi Arabia and Russia.

Oil prices recouped some of their losses on Tuesday, boosting shares of oil and gas and mining companies. BP and Royal Dutch Shell both gained about 3 per cent after closing Monday with their worst session on record.

Ultra Electronics rose 8.5 per cent after the engineering firm said the epidemic had not impacted its business. Informa, the world’s largest exhibitions group, jumped 6.4 per cent, ending the session as the biggest gainer on the blue-chip index, after it reported upbeat annual revenue and profit.

The pan-European Stoxx 600 closed 1.1 per cent down, slipping further into bear territory after marking its worst day since the 2008 financial crisis on Monday.

Investors were also concerned after Sweden’s public health agency on Tuesday raised the risk level for local contagion of the new coronavirus to “very high” from “moderate” and said it was seeing signs of community spread in the Nordic country.

Italian stocks shed early gains to close at a more-than-three-year low. The government is set to approve measures worth about €10 billion to counteract the impact of the virus. German stocks ended more than 1 per cent lower, as coronavirus cases in Europe’s largest economy rose by more than 1,100.

Among individual movers, Germany’s Commerzbank closed up 3 per cent after it said it was yet to see any impact from the outbreak on its business.

Italian highway operator Atlantia ended at a more-than-six-year low amid concerns over a severe fall in traffic due to the outbreak.

German logistics firm Deutsche Post jumped 6 per cent after saying it had started to see volumes in China recover from the impact of the coronavirus outbreak, and announced a bigger than expected annual dividend.

Wall Street was still rebounding by lunchtime on Tuesday as investors pinned their hopes on policy easing by major central banks.

After strong gains at the open, all three major US indices had briefly traded in the red, as investors weighed the effectiveness of additional monetary stimulus to combat the virus outbreak.