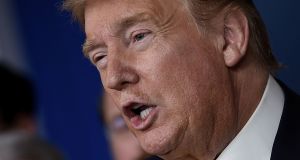 US president Donald Trump tweeted: “Saudi Arabia and Russia are arguing over the price and flow of oil. That, and the Fake News, is the reason for the market drop!”

Democrats lambasted President Donald Trump for his handling of the coronavirus crisis on Monday, as the White House insisted the president was in command of the situation.

Tweeting shortly after attending a fundraiser in Florida, Mr Trump blamed the news media and tensions between Saudi Arabia and Russia over oil prices for Monday’s market turbulence.

“Saudi Arabia and Russia are arguing over the price and flow of oil. That, and the Fake News, is the reason for the market drop!” he tweeted.

Trading on the New York Stock Exchange was stopped for 15 minutes on Monday morning after markets opened in freefall, on the back of a 30 per cent drop in oil prices overnight after Saudi Arabia threatened to raise production and discount the price of crude oil, effectively starting a price war.

But Mr Trump played down the impact of those falls, noting that lower oil prices were good for consumers and insisting that the number affected by the virus was low.

Treasury secretary Steve Mnuchin and economic adviser Larry Kudlow were due to meet with Senate Republicans in Congress on Tuesday, while House Speaker Nancy Pelosi was due to meet with the heads of several committees in the US capitol last night. She urged the Trump administration to “prioritise the health and safety of American workers and their families over corporate interests,” as she criticised the Trump administration’s response to the threat so far.

At least four members of congress – including Texas member Ted Cruz and Paul Gosar of Arizona – are in self-quarantine having been informed that they were in contact with someone who tested positive for the virus at a conservative conference in recent weeks. Mr Trump and vice-president Mike Pence also attended the event which took place in Maryland, just outside Washington DC.

However, the US Capitol was continuing as normal on Monday, with visitors and tour groups still accessing the building.