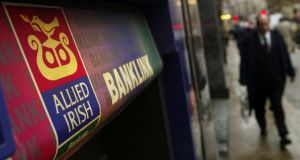 AIB is set to increase its fees for personal banking customers from the end of May, introducing transaction charges for contactless payments and removing the option of fee-free banking for many customers.

In a letter to customers, AIB said it would begin charging a quarterly maintenance fee of €4.50 to customers, with a one cent charge per contactless transaction. Taking cash out from an ATM costs 35 cent, and over-the-counter transactions cost 39 cent.

Previously, customers who had a balance of €2,500 in their current accounts were not charged quarterly fees; that option was being withdrawn, the bank said.

Daragh Cassidy of Bonkers.ie said the changes would mean the majority of account holders would end up paying far more for their banking each month.

“An average customer making five ATM withdrawals, five chip and pin, 10 direct debit and 30 contactless transactions per month, you’ll now be charged €6.56 a month or almost €80 a year,” he said.

“We still have among the highest mortgage rates in the euro zone, the lowest returns for savers, and we increasingly have some of the highest day-to-day banking fees too, so this feels like a real kick in the teeth for consumers.”

He said the charge for contactless transactions was “worrying”, making AIB the third bank – after Bank of Ireland and Ulster Bank – to introduce charges for “tap and pay”.

“Although AIB has kept largely quiet on the reason for the increased fees, part of this is due to the current low-interest-rate environment, with banks now being charged to deposit money with the ECB,” he said. “Ostensibly this is to encourage the banks to lend more and thereby stimulate growth. However, the flip side of this, in Ireland at least, is that these negative rates are leading to weaker profitability for the banks, which are now trying to boost profits by charging higher fees elsewhere.”

He encouraged consumers to look at switching their accounts, and to consider newer “digital only” banks.