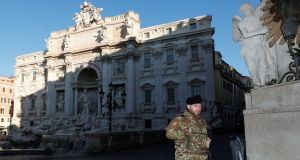 Brussels will consider using flexibility in state aid rules to help EU governments cushion businesses from the coronavirus fallout as officials discuss a widening array of measures aimed at battling the economic damage from the disease.

Ursula von der Leyen, the commission president, said on Monday that the commission was exploring ways of permitting state aid in “exceptional circumstances” as she discussed responses to what she described as the “vast impact” of the virus on the economy.

EU officials are drafting recommendations for a menu of targeted options that member states could use to support sectors hardest hit by the coronavirus. The ideas will be put forward to a finance ministers’ meeting early next week in Brussels, officials said, amid calls from economists for a far more forceful response to the crisis than has been seen to date.

“There is a strong reason to provide a co-ordinated fiscal stimulus to underpin the economy. You need to see the government is on top of this”

Mário Centeno, the head of the Eurogroup, said last week that “no efforts will be spared” in Europe to contain the disease and shield economies from further damage while, on Thursday, the European Central Bank will step forward with its own response.

Guntram Wolff, the director of the Bruegel think-tank, said targeted support for economic sectors affected by coronavirus was important, but it would be necessary to go well beyond this at the euro-zone level. “There is a strong reason to provide a co-ordinated fiscal stimulus to underpin the economy,” he said. “You need to see the government is on top of this.”

EU leaders are due to hold a conference call to discuss their efforts. France is among those urging a “massive” response from Europe in order to avert economic crisis.

Meanwhile, officials in a range of states have been preparing targeted support for companies that are suffering from cash crunches as business is disrupted – raising questions over compliance with EU subsidy rules.

Among schemes that could require state aid clearance from the commission – depending on the circumstances – would be discounted government loans, tax credits or deferral of tax payments.

The regime gives scope for member states to support companies suffering from “exceptional occurrences” and to grant support to handle serious disturbance to the economy, a commission spokesperson said on Monday.

“The commission stands ready to work with member states to ensure that any possible measures can be put in place in a timely manner, in line with EU rules.”

Officials have also been looking at ways governments can support workers who are forced to stay away from work by the crisis, with particular attention focused on Germany’s so-called Kurzarbeit scheme, under which state support is available when individuals are put on reduced hours.

Member states including France are pushing for leniency over non-performing loans to soften the economic impact of coronavirus.

The French finance ministry is asking regulators to stretch out the amount of time it takes for debt to be classified as non-performing, say people briefed on the matter. The aim would be to give some breathing space to firms struggling to make repayments and to banks that would otherwise face higher capital requirements. Officials at the ECB said it was not considering any proposals to revise its guidance on when banks should classify a loan as non-performing.

There was clear resistance from some countries that do not want to trigger a “massive expansion”, but the situation was constantly evolving

Among the most contentious questions now looming for ministers is whether a broader, co-ordinated fiscal push is needed in the region. Ministers in February endorsed a “broadly neutral to slightly expansionary” fiscal stance for this year and next, while adding that a more supportive stance would be needed if downside risks materialised.

Many officials believe this has now happened. “This is a very politically charged discussion,” said one EU official. There was clear resistance from some countries that do not want to trigger a “massive expansion”, but the situation was constantly evolving, the official said.

Alessandro Leipold, chief economist at the Lisbon Council think-tank, said a “whatever it takes” approach was now needed on fiscal policy in the region. This meant the European Council embracing a “clearly supportive stance”, he said in a note. – Copyright The Financial Times Limited 2020