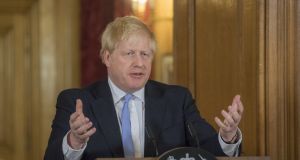 Huawei, the world’s biggest producer of telecoms equipment, has been caught in a stand-off between Washington and Beijing after the United States accused the company of spying to steal Western secrets.

The company denies those allegations and Britain decided in January to allow Huawei into what Johnson’s government said were non-sensitive parts of the British network, capping its involvement at 35%.

The decision angered the United States, which wants to exclude the Chinese company from the West’s next-generation communications systems and has urged Britain to rethink.

A group of Johnson’s Conservatives, which the rebels say number anything from 30 to 50 lawmakers, oppose the decision. Some of them plan to back an amendment to the Telecommunications Infrastructure Bill to ensure that the companies termed by British security experts as “high-risk vendors” - such as Huawei - are stripped out of networks completely by the end of 2022.

“We hope to curb the government’s enthusiasm for installing hardware produced by a company that they acknowledge to be ‘high risk’,” Conservative lawmaker David Jones told Reuters.

The Conservative rebels acknowledge that they do not have the numbers to force a change to government policy. But they hope to fire a sizeable warning shot across the newly installed government’s bows and influence Johnson to take a harder line.

High-profile rebel David Davis said the hope is that an “emblematic” vote on the proposed amendment would spur the government to enter further discussions. If not, he said, the rebels would try to force the government’s hand at a later date.

Mike Rake, the former chairman of broadband and mobile company BT and an adviser to Huawei, said the Chinese company has a vital role in building the 5G network Britain needs.

“Any attempt to further restrict Huawei 5G equipment, or to remove existing 4G equipment, will not only incur very significant costs but prejudice trade relationships with China and will significantly set back the government’s broadband ambitions,” he said in an open letter on Tuesday.

“This, in turn, will further damage our competitiveness as an economy at what is a critical moment.” – Reuters

1 My aunt never told us that Gran passed away with no will
2 If it’s safe to do so, could this be the time to spend for Ireland?
3 Green Party TD queries ‘usefulness’ of another appeal in €13bn Apple tax case
4 Government to push through €2bn credit guarantee scheme next week
5 Brussels plans attack on low-tax member states
Real news has value SUBSCRIBE