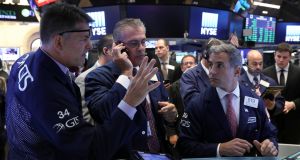 A gauge of global stocks climbed for a ninth straight session on Wednesday after a slew of corporate earnings reports in the United States and Europe.

After decent gains in Asia on the back of positive signs from global economic powerhouse China, MSCI’s world stocks index looked set for a ninth day of gains which would mark its longest winning streak since October 2015. The global index gained 0.33 per cent, setting a record high for a fifth straight session.

Dublin’s Iseq index rose by 13 points to 6,876, slightly under-performing its European peers. The big loser of the day was Independent News & Media, which saw its shares plunge 14 per cent to 11 cents after the company issued a profit warning citing falling newspaper circulation, advertising revenues and “ongoing uncertainty arising from Brexit”. INM shares initially fell by close to 20 per cent, a 53-week low, following the warning, which also highlighted lower than expected growth in digital revenues and increased costs arising from legacy libel awards.

Packaging giant Smurfit Kappa rose by 0.7 per cent to €26.30 on foot of positiive noises for the sector in Europe and elsewhere. Ryanair, meanwhile, dipped to €18.74 after the company bought back 75,000 shares as part of the ongoing buy-back programme.

The FTSE 100 pushed higher on Wednesday, helped by news that Reckitt Benckiser had agreed to sell a basket of its key food brands in a multibillion-pound deal. London’s blue chip index ended the day higher by 0.55 per cent or 40.69 points at 7,430.91, with Reckitt shares ranking among the best performers, up 125p at 7,937p. The household goods giant confirmed it would sell a raft of brands including French’s mustard and Frank’s hot sauces to McCormick in a $4.2 billion deal.

Elsewhere, Royal Mail was the biggest faller on the London market following a heady rise on Tuesday when it revealed that it had narrowed the decline in letter deliveries thanks to a boost from general election political mailings. Shares were down more than 2 per cent, or 11.3p to 399.8p.

Away from the top tier, construction giant Morgan Sindall raced ahead after announcing it was on course for a hefty jump in profit thanks to a bright performance from its interior refurbishment business. Shares climbed more than 4 per cent, or 55p to 1275p.

European stocks rose the most in a week, boosted by positive earnings reports, ahead of Thursday’s European Central Bank policy decision. The Stoxx Europe 600 Index climbed 0.8 per cent at the close, after sliding 1.1 per cent on Tuesday. ASML Holding helped technology shares rebound, rising 5.8 per cent after it won orders for its latest lithography machines and forecast third-quarter sales above analyst estimates.

Among other shares active on earnings reports: Electrolux advanced 3 per cent after raising its growth outlook in North America as second-quarter profit and revenue beat projections. RPC Group, Ubisoft Entertainment and Tele2 rose 4.5 per cent or more after reporting results.

The Nasdaq and the S&P traded at record levels in early trading on Wednesday, powered by technology and healthcare stocks, while IBM capped gains on the Dow. IBM fell 3.7 per cent after the company’s quarterly revenue came in below expectations. The stock was the biggest drag on the Dow and the S&P 500.

Microsoft and Facebook were among the top-three boosts to the S&P and the Nasdaq.

Vertex Pharmaceuticals jumped 22 per cent after the company reported positive results for its cystic fibrosis treatment. The stock was the biggest boost on the S&P and the Nasdaq. Investors will continue to focus on quarterly earnings to see if high valuations are justified in the face of mixed economic data, tepid inflation and policy gridlock in Washington.

Analysts estimate an 8.7 per cent rise in second-quarter earnings and a 4.6 per cent increase in revenue for the S&P 500 companies from a year earlier, according to Thomson Reuters. This follows a robust first quarter when US companies posted the fastest rate of growth in earnings since 2011.