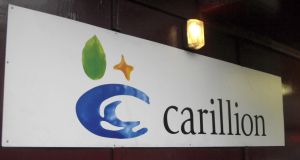 In a half-year trading update, the construction and infrastructure giant Carillion downgraded its full-year revenue guidance, with sales now expected to be between £4.8 billion and £5 billion. Photograph: PA Wire

Markets were down across the board on Tuesday with defensive stocks driving Britain’s FTSE down while the ISEQ’s drop was driven by significant falls for infrastructure related companies like CRH.

The picture was the same across Europe where the Stoxx Europe 600 index fell by 0.65 per cent on a day when the Euro hit an eight-month high against Sterling.

It was speculative news surrounding an email chain between US president Donald Trump’s son and Russian officials that caused companies in the infrastructure business to drop on Tuesday, according to brokers. Ireland’s biggest company CRH dipped by 1.27 per cent to close at €31.02 while Kingspan’s less significant drop of 0.24 per cent allowed it to close at €29.58.

Housebuilder Grafton Group had a positive day after a trading statement said that trading had been better than expected. It edged up as much as 5 per cent but dropped later in the day after being dragged down by UK housebuilders. It ultimately finished up by 1.48 per cent.

Bookmakers were on the move today and, in line with the general trend, closed lower. From an Irish point of view Paddy Power Betfair closed down 2.19 per cent, below the €90 mark, after a UK broker cut their rating on the stock saying they weren’t expecting an upbeat management tone when the group announces its results.

It was Bank of Ireland’s second trading day after it was consolidated so that it was no longer trading as a penny stock. After having a relatively good run over the past two weeks the stock gave up some of its gains and closed down by 2.04 per cent at €7.249.

Britain’s top share index retreated on Tuesday as falls in defensive stocks as well as Pearson and Marks & Spencer overshadowed gains in miners.

Defensive firms and dollar earners were among the biggest weights on the index. They included Vodafone, British American Tobacco, AstraZeneca and Diageo.

Education publisher Pearson was the biggest faller, down more than 5 per cent and giving up early gains after agreeing to sell a 22 per cent stake in book publisher Penguin Random House for around $1 billion in a bid to boost its balance sheet and return cash to shareholders.

Among mid-caps, construction company Carillion continued to suffer fallout after its chief executive stepped down amidst a full-year profit warning on Monday. It sank another 33.5 per cent.

European shares ended Tuesday on the backfoot as losses among defensive consumer staples and real estate stocks outweighed strength in autos and miners.

Broker notes spurred some of the biggest individual moves, with semiconductor maker AMS a top gainer after Credit Suisse upped its target price.

Peer STMicro – a supplier to tech giant Apple – received a boost after JP Morgan raised it to “overweight”, though it ended the session 0.4 per cent lower.

Randstad and Adecco both fell more than 2 per cent, targeted by Deutsche Bank in a note on staffing firms. Analysts at Deutsche cut ratings for the world’s two largest staffing companies, saying current employment levels in the United States and Europe were associated with peaking 12-month investor returns. British recruitment firm Hays followed its European peers down 1.6 per cent.

Investors will be looking at second-quarter earnings reports on Friday from big US banks including JPMorgan Chase, Wells Fargo and Citigroup.

Shares of Arena Pharmaceuticals soared after the drug developer said on Monday its experimental drug for a rare but deadly lung disease met the main goal in a mid-stage study.