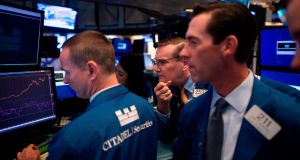 Traders work after the opening bell at the NYSE on July 29th. Photograph: Johannes Eisele/AFP/Getty

European stocks ground out a tiny gain on Monday, as a pair of big merger reports and a weak pound sent London’s FTSE 100 higher, while defensive plays dominated other major markets ahead of Wednesday’s US Federal Reserve policy decision.

The ISEQ, which has tended to fall on fears of a disorderly Brexit, skidded 0.9 per cent on low trading volumes on Monday.

Ryanair slipped 1.4 per cent to €9.88 after reporting a sharp profit fall in the first quarter of its key summer period. It said it may have to curb its growth plans further if Boeing’s schedule for returning the 737 MAX jet to service continues to slip.

The biggest faller was troubled Swiss-Irish bakery group, Aryzta. It finished the session down 5 per cent to 80 cent, as it continues its slide following a downbeat trading statement last month.

Bank of Ireland fell almost 4 per cent to €4.18, after it announced underlying profits fell 25 per cent to €376 million in the first half of the year.

Oil explorer Providence Resources plunged by almost 30 per cent to 9 cent after it said it has still not been paid funds due by its Chinese Barryroe project partner.

The FTSE 100 had a strong showing on what should have been a quiet day for the leading blue chip index. Deals galore and a plunging pound helped the index close the day up 137.55 points, or 1.8 per cent.

Just Eat was the biggest riser, closing up 144.4p, or 22.7 per cent, at 780p. The rise was due to bosses announcing a €9 billion merger with Dutch rivals Takeaway. com. But the shares closed considerably higher than the 731p a share offer from Takeaway.com, suggesting a rival bid could be on its way.

London Stock Exchange Group also confirmed talks to acquire data vendor Refinitiv, in a move that would create a financial information giant. Under the terms of the possible deal, LSE Group would acquire Refinitiv, which makes the Eikon software, for $27 billion. Shares in LSE Group closed up 870p, or 15.3 per cent, at 6,542p.

The pan-European STOXX 600 index rose 0.14 per cent, while the German Dax was flat and the French Cac lost 0.2 per cent.

The pan-European stocks benchmark index was up just 0.03 per cent, with sectors such as real estate and utilities gaining as investors favoured dividend-yielding names in expectation that interest rates globally are about to fall.

Healthcare stock were mixed with Sanofi rising 1.5 per cent after boosting its 2019 outlook, while Novartis dropped 1.0 per cent as a trial for a new use of its Entresto heart drug failed. Heineken dropped 4.6 per cent after the world’s second largest brewer missed estimates for first-half profit.

A fall in shares of Amazon and Facebook pulled the S&P 500 and Nasdaq indexes lower on Monday as investors looked ahead to major tech earnings including that of Apple to assess the impact of US-China trade tensions.

The S&P 500 technology sector, the benchmark index’s best performer so far this year, dropped 0.1 per cent, while the consumer discretionary sector fell 0.91 per cent.

However, a rise in shares of Apple ahead of its quarterly report after markets close on Tuesday helped support the blue-chip Dow Industrials index.

Mylan jumped 14.17 per cent after it confirmed reports over the weekend that it was combining with Pfizer’s off-patent branded and generic established medicines business to form a new global player.

Pfizer fell 1.69 per cent after the drugmaker cut its full-year profit and revenue forecast in an unexpected release of its quarterly results to go with the deal announcement.