Markets report: CRH boosted as US rivals outperform with results 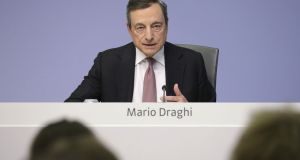 Markets fell as the European Central Bank disappointed those hoping for firm news of an interest rate cut on Thursday, although the bank did signal that a cut could be imminent.

Building materials giant and index heavyweight, CRH, rose 1.32 per cent to €29.84 after north American rivals Vulcan and Cemex reported better than expected results. About half of CRH’s business is in the US.

Home lender Permanent TSB, which reported on Thursday that profits for the six months ended June 30th fell 42 per cent to €42 million, added 1.5 per cent to €1.216, but traders said that the number of shares traded was small.

Ryanair fell 1.7 per cent to €10.39, giving back some of the gains that the low-cost airline made over previous days.

Howden Joinery, kitchen supplier and rival of Irish group, Grafton, surged on news that it grew pretax profits 14 per cent to £78.1 million in the 24 weeks ended June 15th.

Shares closed 8.97 per cent up at 551.8p despite Howden saying it was cautious about the likely impact of Brexit on its business and was stockpiling in case the UK leaves the EU without a deal in October.

The news boosted Woodies DIY owner, Grafton, which has a large builders’supply business in the UK and whose shares are listed in London. The Irish group’s stock rose 1.96 per cent to 778.5p. Builder Travis Perkins also benefitted, gaining 3.35 per cent to close at 1,359p.

Traders said Howden’s news indicated that conditions in the UK were “not as bad as people assume them to be”.

Guinness owner, drinks group Diageo, fell 3.37 per cent to 3,240.5p as its plans to return £4.5 billion to shareholders disappointed some backers, who had expected more.

Aston Martin, which shed over a quarter of its value after the luxury carmaker cut its 2019 volumes forecast in the previous session, fell another 17.76 per cent on Thursday to 630.6p. Wizz Air climbed 3.8 per cent to 3,742p. The airline reported that it earned €72.4 million profit in the three months to June 30th, the first quarter of its financial year.

European shares fell steeply with German stocks taking the biggest hit, collectively shedding 1.3 per cent. Car parts maker Hella was down 6 per cent as it became the latest company to warn of a deteriorating automotive sector.

Italian cement maker, Buzzi, fell 1.07 per cent to €18.94 despite good news from the same industry in the US.

Banks ended 0.2 per cent lower after shooting up earlier in the day on news the ECB discussed tiered deposit rates, which would partially exempt lenders from from paying the ECB’s 0.4 per cent annual charge on their excess reserves, boosting their profits.

US stocks slipped on Thursday after a handful of disappointing earnings pointed to a slowing global economy and as the ECB signalled monetary policy easing in the future, underwhelming investors who had expected more.

Chip maker Xilinx declined 2.7 per cent after providing current-quarter revenue forecast below market expectations, hit by the impact of US restrictions on selling to Huawei. The Philadelphia chip index dropped 0.97 per cent, a day after hitting a record high.

Social media site Facebook, whose European operation is based in the Republic, reversed pre-market gains to trade 2 per cent lower. The social media giant said new rules and product changes aimed at protecting user privacy would slow its revenue growth into next year. – Additional reporting: Reuters