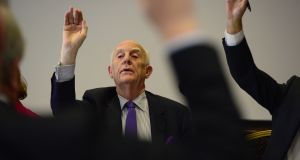 Shares in Karelian Diamond Resources collapsed on Friday after chairman Richard Conroy and other board members survived a shareholder revolt at an extraordinary general meeting.

Mr Conroy, alongside Maureen Jones, Séamus Fitzpatrick, Louis Maguire and Dr Sorca Conroy, a daughter of the chairman, will remain on the board after 47.75 per cent of shareholders voted to remove the board members, with the remaining 52.25 per cent voting for them to remain.

Shares in the company had fallen by 21.25 per cent on Friday afternoon on unusually high volume. By 2pm, more than 706,000 shares had been traded.

Additional resolutions to appoint new board members also failed and, as a result, the board composition will remain unchanged.

In May, a group of rebels in the London-listed explorer made a move to oust Mr Conroy from the board. The rebels proposed replacing the chairman and other directors with Alan Osborne, Kevin Taylor and diamond-mining experts Stephen Grimmer and Martin Doyle.

The four, who own 17 per cent of the company, say that, after 14 years of zero returns, Karelian’s backers face serious losses.

“It’s very clear there has been little to no progress to benefit shareholders – large amounts of money raised for development have instead gone on directors’ salaries,” they said.

Mr Conroy, who controls 21.7 per cent of the company, recently rejected this, saying that the directors put €2 million into Karelian. A company statement says board members have invested €1 million more in the business than they have taken in fees.

Mr Conroy was at the centre of a separate revolt in 2017, when an investor successfully unseated six directors at Irish-headquartered Conroy Gold, of which Mr Conroy is also chairman.

The company was ultimately awarded all costs after winning a High Court battle against the dissident shareholder behind the move.

That case centred on a move by major shareholder Patrick O’Sullivan to obtain a declaration that he and two of his nominees had wrongly been blocked by Mr Conroy from being elected directors of the gold mining company’s board.

At an earlier emergency general meeting, the company urged shareholders to vote against resolutions to remove Mr Conroy and managing director Maureen Jones as directors. Those resolutions were defeated.

However, six out of the board’s nine directors were removed from their positions, including Mr Fitzpatrick, Dr Conroy and Mr Maguire.