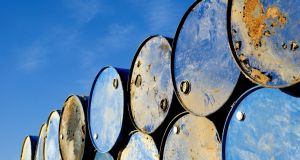 Current gross production at the Abu Sennan concession stands at more than 5,100 barrels of oil equivalent per day. Photograph: iStock

In a statement on Tuesday, the London-listed company said it proposes to acquire Rockhopper Egypt. As the process triggers a reverse take over under the stock exchange rules, shares in United have been suspended.

The company, founded by a group who worked together in Tullow Oil, said oil major BP will provide financing for the deal of up to $8 million. Additionally, BP and United have entered into an offtake agreement regarding future production whereby BP will purchase all, or a substantial amount, of the output produced from the project.

Rockhopper has been operational in Egypt since 2016 and it has a 22 per cent interest in a set of operational oil fields with 17 producing wells. Current gross production at the Abu Sennan concession stands at over 5,100 barrels of oil equivalent per day (BOEPD).

“This diverse portfolio is already offering shareholders a range of options for value enhancement. The proposed acquisition announced today would deliver production and cash flow to this already impressive stable,” he added.

The acquisition will see United gain access to a significant set of prospects given the 653km sq exploration area associated with the Abu Sennan concession. Additionally, the directors believe current production can be expanded through a drilling programme already under way.

While BP is providing a significant portion of financing for the deal, United will place new ordinary shares worth up to $5 million to Rockhopper.

Subject to successful completion of the transaction, United shares will be re-admitted to the London AIM market “at a date to be confirmed”.