Markets quiet as traders tread water ahead of ECB meeting 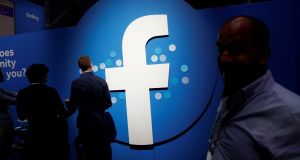 Facebook is among the tech giants set to report results this week.

Gains in oil heavyweights amid heightened tensions in the Middle East helped London’s main index hold steady on Monday. European shares ended flat as a summer lull hit trading volumes at the start of a pivotal week that will see a deluge of corporate earnings reports, as well as a European Central Bank meeting over monetary policy.

US stocks eked out small gains as investors were wary of making big bets ahead of key central bank meetings on interest rates and waited for earnings from marquee companies including Facebook and Amazon due later this week.

The Iseq rose barely 0.25 per cent on wafer-thin trading volumes.

Aside from exploration penny stock Providence Resources, the Iseq’s best performer on Monday was budget airline Ryanair, which shrugged off industrial relations concerns to finish up 4.3 per cent to €10.21.

Oil majors Shell and BP rose about 1 per cent each, tracking gains in crude prices on concerns that Iran’s seizure of a British tanker last week may lead to supply disruptions in the Middle East.

Monday’s gains in the midcap bourse were led by Ted Baker with a 13.5 per cent jump, after a media report that its founder Ray Kelvin could back a private equity buyout of the retailer, months after he resigned.

Tour operator TUI’s London-listed shares rose 4.6 per cent, topping the FTSE 100 leader board after Stifel resumed coverage on the stock with a “buy” rating.

Just Eat added 2.3 per cent after the online takeaway service said it would lay off “a number” of jobs in Britain as it combined its customer and restaurant operations.

The pan-European Stoxx 600 index closed up just 0.07 per cent, with just 151.5 million shares changing hands at the close compared with its 30-day average of 1.8 billion.

Spanish banks were a weak spot ahead of earnings from the euro zone’s biggest bank by market value, Banco Santander, on Tuesday. The broader banks index was down 0.3 per cent. Spain’s acting prime minister Pedro Sanchez signalled on Monday that his Socialist party was close to forming a government with far-left Podemos, which would pave the way for him to be sworn in by parliament.

The biggest gainer on the Stoxx index was Dutch health technology firm Koninklijke Philips, up 5.7 per cent, after reporting better-than-expected quarterly sales growth.

Energy shares were again among the top gainers, tracking a rise in crude prices due to tensions in the Middle East and propping up London’s commodity-heavy blue-chip index.

Hopes of an interest rate cut have helped Wall Street’s main indexes hit record levels this month, recovering from a slump in May caused by a sudden escalation of US-China trade tensions.

About 30 per cent of S&P 500 companies are set to report second-quarter results this week, with overall profits now estimated to rise about 1 per cent, according to Refinitiv IBES data.

Facebook, Amazon.com and Google parent Alphabet, up between 0.2 per cent and 1.4 per cent, are set to report results on Wednesday and Thursday. The technology index rose 1.23 per cent, the most among the S&P sectors.

Shares of Boeing fell 1.13 per cent and pressured the blue-chip Dow index after rating agency Fitch revised its outlook on the aircraft maker to “negative” from “stable,” while the tech-heavy Nasdaq was lifted by chipmakers.

1 ‘My rent here is so low it’s a joke’
2 If tourists are such pariahs should we not be testing them on arrival?
3 Ashford Castle reopening after $50m makeover by new owner
4 Can Grafton Street stop the flood of closures?
5 Varadkar and Donohoe to meet banks to discuss mortgage breaks
6 Ashford Castle hotel resort sold for €20m
7 New Powerscourt Springs hotel to open in defiance of virus gloom
8 Belgium helps Ireland to a Brexit boon
9 AIB to compensate another 1,100 tracker mortgage holders
10 The €1 billion market: retailers who serve tourists face double trouble in a pandemic
Real news has value SUBSCRIBE