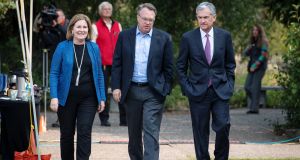 John Williams, chief executive officer of the Federal Reserve Bank of New York (centre), has called for action on rates.

The dollar was on the defensive on Friday after Federal Reserve officials bolstered expectations of an aggressive rate cut this month to address weakening price pressures.

At a central banking conference on Thursday, New York Fed president John Williams argued for pre-emptive measures to avoid having to deal with too low inflation and interest rates.

Although a New York Fed representative subsequently said Williams’ comments were academic and not about immediate policy direction, investors still took his remarks along with separate comments from Fed vice chair Richard Clarida as a dovish signal from the central bank.

On the week, the dollar is down 0.4 per cent versus the yen and almost flat on the euro.

The greenback fell broadly on Thursday after Williams’ remarks bolstered bets that the Fed would cut interest rates by 50 basis points, rather than 25 basis points.

Williams said when rates and inflation are low, policymakers cannot afford to keep their “powder dry” and wait for potential economic problems to materialise.

That is especially true with neutral rates that would neither restrict nor accelerate the US economy “around half a per cent,” he said. When adjusted for inflation, the neutral rate is near the Fed’s current policy rate, which is in a range of 2.25-2.50 per cent.

Financial markets quickly reacted, with money market futures pricing in almost a 70 per cent chance of a 50 basis point cut at its policy meeting on July 30th-31st at one point.

The odds eased to around 40 per cent after the New York Fed said later that his speech was not about potential actions at the upcoming policy meeting.

Still, Williams’ rate-cut view was echoed by Fed Vice Chair Clarida, who told Fox Business Network the central bank might have to act early and not wait “until things get so bad”.

“Williams’ comments were surprisingly dovish. The NY Fed went all the way to try to modify the message but no one seems to have done so for Clarida, who also said a very similar thing,” said Daisuke Uno, chief strategist at Sumitomo Mitsui Bank. – Reuters

1 In six months we will be in the grip of a 1980s-style recession
2 Angela Merkel sweeps in to save the euro zone
3 Property price drop of up to 12% this year a ‘reasonable’ assumption – McDonagh
4 Donohoe warns of cost of pandemic as budget deficit swells to €6.1 billion in May
5 Avoca wins battle with Monkstown locals over cafe operation
6 Chartered Land moves closer to approval for Dublin’s tallest tower
7 Aer Lingus wants quarantine period axed to resume flights in July
8 Should my mam wait for house prices to drop before buying?
9 Stocktake: Has Warren Buffett lost the magic touch?
10 Brother is dragging his heels as executor of uncle’s will - is there anything I can do?
Real news has value SUBSCRIBE