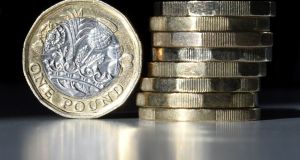 Sterling has been made extra vulnerable by the UK’s departure from the EU, analysts said. Photograph: AFP via Getty

Sterling has tumbled to its lowest level on record against the currencies of the UK’s major trading partners, as the effects of the coronavirus pandemic continue to rip through markets.

Sterling’s broad effective exchange rate, measured against a basket of currencies corresponding to the UK’s trade flows, hit a low of 72.9 on Tuesday, according to the daily reading compiled by the Bank of England. That is weaker than at any time during the Brexit process, the 2008-09 financial crisis or even the UK’s ejection from the European Exchange Rate Mechanism in 1992. The rate regained a little ground on Wednesday to 74.4.

The central bank’s data stretches back to the 1970s, but given the historic strength of the pound, the recent falls indicate that the UK currency has traded “effectively at its lowest level ever” this week, said Alain Naef, a postdoctoral fellow at the University of California, Berkeley.

The pound endured a heavy fall last week, which saw it tumble below $1.15 against the dollar, having been above $1.30 at the beginning of March. On Monday, it hit a low of $1.1454 before a tentative fightback, reaching $1.1927 by Wednesday morning.

Against the euro, sterling was at 87p at the start of the month, but is now trading above 92p.

Along with other major currencies, the pound has been knocked by a surging dollar as companies and banks have been hoarding greenbacks to pay their debts and keep business flowing during the crisis.

But sterling has been made extra vulnerable by the UK’s departure from the EU, analysts said, while a new burst of monetary stimulus and the government’s planned relief package have also turned investors more negative on the currency’s prospects.

“I think the most important driver of sterling at present are fears of debt monetisation,” said Roger Hallam, chief investment officer for currencies at JP Morgan Asset Management. “The government will spend a lot in response to the outbreak and it seems pretty clear to me that there has to be more [quantitative easing] in the UK. That’s what investors are pricing in, by pushing sterling lower.”

“The UK has a twin deficit and a history of high inflation following times of stress,” Mr Hallam said, alluding to shortfalls on both the current account and the government budget. “The response in currency markets seems reasonable to me.”

Rishi Sunak, the UK chancellor, has laid out a sweeping programme of relief that amounts to an unprecedented economic intervention, including a plan to pay furloughed workers during the pandemic. The chancellor and Treasury officials have declined to put a price tag on the spending programmes, which have been matched by a host of monetary easing measures from the BoE.

The central bank slashed rates twice this month to a record low of 0.1 per cent and relaunched a £200 billion (€216 billion) bond-buying programme to alleviate the effects of the crisis.

In a sign of the tough outlook for the UK, a key survey assessing the state of the economy this month showed a record plunge in business activity.

“The Covid-19 outbreak has already dealt the UK economy an initial blow even greater than that seen at the height of the global financial crisis,” said Chris Williamson, chief business economist at IHS Markit. – Copyright The Financial Times Limited 2020