US stocks down despite forceful efforts of Federal Reserve 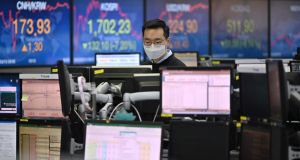 European and US shares continued their fall on Monday as central bank efforts at stimulus failed to ease fears of recession.

Building materials group and Iseq index heavyweight CRH shed 1.32 per cent to €18.715 after hitting a low of €17.34 in early trade on Monday.

On Wall Street the S&P 500 fell after lawmakers failed to agree on a stimulus bill over the weekend and again fell short of the needed Senate votes on Monday.

Tech shares outperformed, with the Nasdaq 100 fluctuating, as negotiations continued on Capitol Hill. House Speaker Nancy Pelosi said the Democrats would release their own plan after rejecting the Republican proposal. The S&P is down almost 35 per cent from its February 19th record and is headed for the lowest close of Donald Trump’s presidency. The Dow Jones Industrial Average dropped as much as 5 per cent Monday and at one point lost all its gains since he was elected on November 8th, 2016.

In Europe, the Stoxx 600 index closed 4.3 per cent down. German shares shrugged off Berlin’s €750 billion stimulus package and fell 2 per cent as car makers once again suffered.

A rally in US Treasuries shortly after the Fed announcement also failed to hold. “The Federal Reserve is committed to using its full range of tools to support households, businesses, and the US economy overall in this challenging time,” the Fed said in a statement.

The Fed had already sped up the pace of asset purchases in recent days after its earlier interventions failed to ease the strains in debt markets.

The promise by the Fed to buy unlimited amounts of US Treasuries sent the benchmark 10-year note on a wild ride but within 90 minutes the yield, which falls when prices rise, was roughly 4 basis points lower at 0.8 per cent, little different from before the news.

The dollar weakened, dropping 0.7 per cent against the Japanese yen in the wake of the Fed announcement.

Meanwhile, the Iseq index slumped again on Monday, with banks and travel stocks among the worst performers, as European markets traded near seven-year lows on Monday after several countries expanded measures to curtail the spread of the coronavirus pandemic.

Italy banned even domestic travel as the number of fatalities there topped 5,400, while Ireland’s Health Minister Simon Harris warned that the Government may need to bring in stricture rules to maintain social distancing.

The relentless spread of COVID-19, the disease caused by the novel coronavirus, has forced entire countries to self-isolate and brought economic activity to a grinding halt, driving the biggest global market sell-off since the 2008 financial crash.

With growing evidence of the corporate damage from paralysed supply chains and consumer spending, analysts have suggested the global economy was already in recession.

Planemaker Airbus fell another 12.7 per cent after saying it was withdrawing its 2020 financial forecast, dropping a proposed 2019 dividend and suspending funding to top up staff pension schemes.

In Dublin, AIB plunged 7.7 per cent, while Bank of Ireland spiralled 12.8 per cent lower. Staffing company CPL Resources dropped 18 per cent amid mounting fears over the prospects for the Irish and global economies.

Travel stocks were also sharply lower, with Irish Continental Group down 15 per cent and Ryanair off 7.3 per cent as the carrier prepares to have most if not all of its flights grounded from Tuesday midnight.

Asian shares also sank on Monday as a rising tide of national lockdowns threatened to overwhelm policymakers’ frantic efforts to cushion what is likely to be a deep global recession.

“Further deterioration in the Covid-19 outbreak is severely damaging the global economy,” Morgan Stanley analysts warned on Monday. “We expect global growth to dip close to GFC [global financial crisis] lows, and US growth to a 74-year low in 2020.”

In a taste of the pain to come, futures for the S&P 500 dived 5 per cent, pointing towards another slump on Wall Street when US trading gets underway.

UBS Australian head of equities distribution George Kanaan said global financial markets were currently gripped by fear, which seemed unlikely to ease any time soon, despite the co-ordinated efforts of governments and central banks around the world.

“I have been in the financial markets for 27 years and I have never seen anything like this,” he told Reuters by telephone from Sydney. “This is unprecedented in terms of fears and there are two elements driving that.

“First is that this involves masses of people. In the /[global financial crisis/], that was an event that occurred in the investment banks around the world, it didn’t involve people on the street. The second is that social media is helping to

Globally, analysts are dreading data on weekly US jobless claims due on Thursday amid forecasts they could balloon by 750,000, and maybe by more than a million.

US stocks have already fallen more than 30 per cent from their mid-February peak and even the safest areas of the bond market are experiencing liquidity stress as distressed funds are forced to sell good assets to cover positions gone bad.

In contrast to the response by authorities to the global health crisis, however, are calls from some on Wall Street to ease restrictions as soon as possible to give the economy room to recover.

“But crushing the economy, jobs and morale is also a health issue-and beyond. Within a very few weeks let those with a lower risk to the disease return to work.”