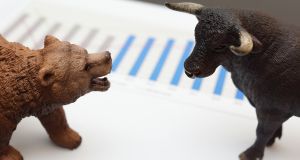 Ireland’s Iseq stocks index, and wider European equity markets, rallied on Tuesday as a fresh round of monetary and fiscal stimulus offered some relief even as the coronavirus pandemic spreads rapidly across the globe.

The benchmark Iseq all-share index closed 6.94 per cent higher, but remained more than 33 per cent lower since the start of the year.

Wall Street jumped at the open as signs that Washington was nearing a deal on a $2 trillion (€1.84 trillion) economic rescue package gave a shot of optimism to markets reeling under the biggest sell-off since the global financial crisis.

Additionally, the US Federal Reserve has pledged to buy a potentially unlimited amount of government debt and provide additional lending support to businesses in its latest massive intervention in an economy ravaged by coronavirus.

The pan-European Stoxx 600 index, meanwhile, closed 8.16 per cent higher, but still set for its worst month since 1987 as the health crisis threatened to crimp global growth, with some analysts seeing a 24 per cent fall in European gross domestic product (GDP) in the second quarter.

Bond markets had already been bracing for a huge downturn, and were weighing this against an expected rise in issuance as governments step up fiscal stimulus to counter the slowdown.

Banking stocks were a particular bright spot in Irish trading, with AIB rallying 24.6 per cent. Bank of Ireland ended the day 6.91 per cent higher.

Forecourt retailer Applegreen, which initially opened higher, was more than 11 per cent down after it warned that it expects a “material reduction” in profits this year.

Baked goods group Aryzta also fell in to the red despite opening higher with investors concerned over its move to cut costs as it too noted that the spread of Covid-19 will have a “material impact” on its full year results. The company’s shares were down 7.27 per cent. – Additional reporting, Reuters

7 France issues ‘clear and final no’ over Carrefour takeover bid