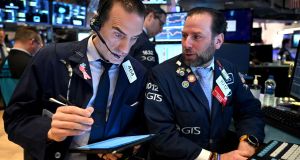 Coronavirus fears are trumping all other market sentiment. Photograph: AFP via Getty

Irish shares continued to fall sharply on Wednesday afternoon as fears over the relentless global spread of the coronavirus raised doubts about governments’ ability to contain the economic damage.

By close, the Iseq index was down by 7.7 per cent to 4,366 points. The pressure on the Irish index mirrored steep falls in Wall Street, where the Dow Jones Industrial Average had tanked by more than 8.8 per cent by mid-afternoon trading, erasing its gains since Donald Trump’s inauguration as president on January 20th, 2017.

An hour after opening, it was down 6.2 per cent to 19,914 points, on steep falls in blue-chip stocks such as Boeing.

The sharp sell-off in US equities reversed much of the gain seen on Tuesday despite the Federal Reserve overnight unveiling the latest in a series of support measures and the White House opening talks with Congress on a $1 trillion fiscal stimulus package.

Sterling fell 5 per cent in violent trading on Wednesday afternoon. The currency hit a low of $1.1463, having closed the previous day at $1.2050

“There’s more bad news about the potential severity and duration of the global economic sudden stop, continued signs of stress in the functioning of markets and concern about a generalised financial deleveraging,” said Mohamed el-Erian, chief economic adviser at Allianz.

After rallying early on Wednesday, US treasuries sold off sharply, with the benchmark 10-year yield falling 0.06 percentage points to 1.14 per cent. Yields on European government debt rose to their highest levels in weeks as fund managers came under pressure to return cash to investors and were forced to dump their most liquid holdings, according to traders.

Yields move in the opposite direction to prices.So far this year, the Irish index has declined by more than 36 per cent. The index had declined by 3 per cent to 4,590.9 by 8.30am, while the pan-European Stoxx 600 index was down 1.9 per cent, with bourses in London and Germany leading declines.

European equities had closed up more than 2 per cent on Tuesday as Spain announced a bumper stimulus plan to combat the economic shock of Covid-19, but global equities fell again on Wednesday as concerns over the virus’s impact on corporate finances returned to the forefront.

Ryanair slumped 8.2 per cent in the morning as the airline industry continued to make dramatic cuts to services as the coronavirus continued to spread. However it recovered to 5.2 per cent down by closing. Housebuilders were also among the main decliners in Dublin, with Cairn Homes down 10.5 per cent and Glenveagh Properties off 8.3 per cent.

Hostel booking company Hostelworld lost more than half its value, while CRH dropped close to 15 per cent as investors worried about the rising threat of a global recession.

In London, Irish sandwich and prepared meals maker Greencore lost 8.5 per cent in the morning as the company said on Wednesday that it was trading “in line with expectations” but warned it was too early to say what the impact of the deadly virus would be on its financial year 2020 results.

Most traditional safe-haven assets globally were also under pressure as battered investors looked to unwind their damaged positions, leading to wide discrepancies between various markets.

Big price swings have left market participants nursing losses, making them reluctant to jump back into the market and thereby reducing trading volume.

The increase in Wall Street shares the previous day came as policymakers cobbled together packages to counter the impact of the virus.

The Trump administration on Tuesday unveiled a $1 trillion stimulus package that could deliver $1,000 cheques to Americans within two weeks to buttress an economy hit by coronavirus while many other governments look to fiscal stimulus.

“That would be bigger than a $787 billion package the Obama administration came up with after the Lehman crisis, so in terms of size it is quite big,” said Masahiro Ichikawa, senior strategist at Sumitomo Mitsui Asset Management. “Yet stock markets will likely remain capped by worries about the spreading coronavirus.”

Britain unveiled a £330 billion rescue package for businesses threatened with collapse while France is to pump €45 billion of crisis measures into its economy to help companies and workers.

Still, forecasters at banks are projecting a steep economic contraction in at least the second quarter as governments take draconian measures to combat the virus, shutting restaurants, closing schools and calling on people to stay home.

The US Federal Reserve stepped in again on Tuesday to ease funding stress among corporates by reopening its Commercial Paper Funding Facility to underwrite short-term corporate loans.

“While markets react to positive news on stimulus, that doesn’t last long. I think there are a lot of banks and investors whose balance sheet was badly hit and they still have lots of positions to sell,” said Shin-ichiro Kadota, senior currency and rates strategist at Barclays. – Additional reporting: Reuters