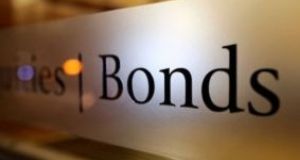 The Irish Government, which had been planning for a budget surplus to the tune of 0.7 per cent of gross national product this year, is now set to go into a budget deficit

The National Treasury Management Agency (NTMA) sold €500 million of short-term debt on Thursday to carry a yield of minus 0.39 per cent, as investors digested an emergency move by the European Central Bank (ECB) overnight to launch a €750 billion bond-buying programme to ease the impact of the coronavirus pandemic.

The sale of the Irish so-called Treasury Bills was part of the NTMA’s regular auction schedule, with the debt due to mature in August. The agency received demand for 2.5 times the amount of bills that were on offer, it said in a statement.

The results of the auction compared to one carried out in February, when the Government sold €500 million of Treasury Bills, also due in August, to carry a yield of minus 0.535 per cent. That issuance was 2.9 times oversubscribed.

The ECB announced late on Wednesday night that it was starting up a Pandemic Emergency Purchase Programme (PEPP), six days after the bank, led by its president, Christine Lagarde, failed to appease markets with its efforts to calm markets.

The new programme will help keep borrowing costs down as euro zone governments prepare to go into the debt markets to raise large amounts of money to fund massive stimulus programmes to help their economies cope with the shock caused by the rapid spread of Covid-19.

The Irish Government, which had been planning for a budget surplus to the tune of 0.7 per cent of gross national product this year, is now set to go into a budget deficit.