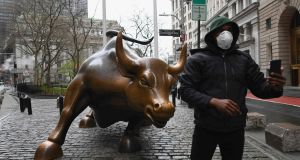 European shares fell again on Monday as the coronavirus spread continued to fuel fears of a recession in 2020.

Dealers said that CRH, Ryanair and Kerry Group shares traded heavily on a day when the Irish market performed more or less in line with the rest of Europe.

Ingredients and food specialist Kerry Group lost 2.4 per cent to end the day at €101.50. Its shares traded at a low of €93.65 in the morning before making ground later in the day.

Ferry company Irish Continental Group tumbled 17.46 per cent to €2.60 on Monday but dealers pointed out that the shares had actually jumped 17 per cent on Friday. “They were just giving back what they gained on Friday,” said one trader.

Ryanair, Europe’s biggest airline, shed 1.82 per cent to close at €8.65 as investors continued to tread warily around what is one of the sectors hardest hit by the Covid-19 crisis.

Packaging group Smurfit Kappa dropped 7.58 per cent to €20.98 as stockbroker analysts sounded a note of caution on its industry.

On the domestic front, builder Cairn Homes fell 3.07 per cent to 66.3 cent. Hibernia Real Estate Investment Trust closed 6.16 per cent down at 80.7 cent.

Shares in Penneys and Primark owner Associated British Foods fell 7.5 per cent to 1,627.5 pence sterling, after it said it would close all its of its stores around the world, a loss of about £650 million (€697 million) worth of net sales a month.

Aer Lingus and British Airways owner International Consolidated Airlines Group plunged 6.56 per cent to 202.1p its industry continued to wait for the outcome of talks about support packages for its industry.

German shares shrugged off a €750 billion stimulus package from Berlin, closing about 2 per cent lower as major car makers face a dual hurdle of production curbs and flatlining demand.

In another sign of growing corporate damage from the outbreak, Airbus fell nearly 14 per cent to €55 after saying it was withdrawing its 2020 financial forecast, dropping a proposed 2019 dividend and suspending funding to top up staff pension schemes.

Confectioner Nestlé SA, the largest stock on the Stoxx 600, dropped 6 per cent for the day as its chief executive told employees to prepare for a “coronavirus storm”, an internal memo showed.

Oil and gas heavyweights Total and Royal Dutch Shell both rose 6 per cent after suspending their respective share buybacks and outlining cost cuts to cope with lower oil prices. The two took the oil and gas subindex marginally higher for the day, making it the only gaining European sector.

Wall Street’s slide deepened further on Monday as the rapidly-spreading coronavirus forced more US states into lockdown, overshadowing the Federal Reserve’s bid to shore up credit.

The Fed’s stimulus measures failed to reassure investors jolted by a $9 trillion wipeout in the benchmark S&P 500’s value since a record high hit last month. A rush for safe-haven assets such as government bonds caused US Treasury yields to fall on Monday.

Boeing was among the top gainers on the Dow, rising 4.44 per cent after Goldman Sachs upgraded its rating on the aircraft maker to “buy”. – Additional reporting: Reuters