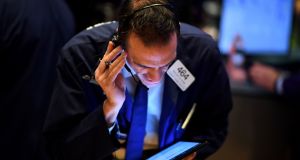 A trader at New York Stock Exchange. The benchmark S&P 500 swung into positive territory after falling as much as 3.3% earlier in the session. Photograph: Getty Images

European shares ended higher on Thursday after more emergency stimulus from the Bank of England, although questions remained over whether it would suffice to dampen the economic shock from the coronaries outbreak.

London stocks closed slightly up after the Bank of England cut interest rates to 0.1 per cent and ramped up its bond-buying. The move followed emergency measures from the European Central Bank earlier on Thursday.

The pan-European Stoxx 600 index ended 2.9 per cent higher, although the day’s gains were a fraction of the losses incurred over a month-long selling spree. The index has lost more than a third of its value since a record peak hit last month.

Dublin’s Iseq rose 1.5 per cent to 4,432 in tandem with other European indices but is still down over 38 per cent since the start of the year.

The banks, however, remained in the red, suffering further losses after agreeing to implement a loan repayment break of up to three months for those affected by the spread of coronaries.

AIB was the worst performing financial stock on the pan-European Stoxx 600, crashing 24 per cent to close at just 77 cent. The bank has also reportedly postponed its first sale of a deeply distressed owner-occupier loan book, which was set for final bids in middle of next month. Bank of Ireland was also down but by a smaller margin of 5.6 per cent, closing at €1.73.

Food giant Kerry was the main climber, rising 9 per cent to €107.80 on foot of positive news surrounding the coronavirus containment in China.

Insulation-maker Kingspan was down 3.5 per cent at €39.34 after announcing a plan to halve executives’ pay and cut workers’ wages by 40 per cent for two months to combat fallout from the Covid-19 crisis.

Ryanair was down just 1.1 per cent at €8.32, having been further behind earlier in the session.

Britain’s top shares ended a volatile session higher on Thursday after the Bank of England cut interest rates to a record low and ramped up its bond-buying programme in a bid to rescue the economy from the coronavirus crisis.

After wild swings earlier in the day, the blue-chip FTSE 100 rose 1.4 per cent, with big dollar earners such as Diageo, Royal Dutch Shell and AstraZeneca providing the biggest boost, even as the pound recovered from a 35-year low.

The central bank cut interest rates to 0.1 per cent, its second emergency rate cut in just over a week, and promised £200 billion of additional bond purchases, and at a much faster pace than normal.

Shares in homebuilder Crest Nicholson slumped 30 per cent after it cancelled payment of its final dividend along with financial forecasts for 2020.

A price war between major oil producers and weakening demand due to strain from the outbreak has seen prices wallowing at multi-year lows. The Stoxx 600 had dropped earlier in the day as the ECB’s measures received a lukewarm reception from markets.

“The stimulus package didn’t provide much cheer as there is still a perception the health will get worse before it gets better – traders are mindful that we have yet to see the peak of the crisis,” said David Madden, market analyst at CM Markets in London.

German pharmaceutical maker Bayer ended 3.6 per cent higher as it collaborated with the US government on the coronaries outbreak.

Wall Street tried to bounce back on Thursday from dramatic losses in the previous session as policymakers around the world pulled out all the stops to try and stave off a deep and lasting coronavirus-driven recession. The benchmark S&P 500 swung into positive territory after falling as much as 3.3 per cent earlier in the session.

Accenture cut its full-year revenue and earnings outlook, citing an impact from the coronavirus outbreak. However, its shares rose 6.7 per cent.