Sterling extends gains but rally may be drawing to a close 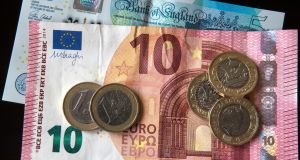 Sterling edged higher on Monday after posting its biggest jump in four months on Friday on a media report that the Netherlands and Spain were open to a deal for Britain to remain as close as possible to the EU crushed short positions.

The British currency’s gains above the $1.37 line was also due to broad dollar weakness which, if anything, has gathered steam in the opening days of the year with the greenback falling to a three-year low against the euro.

But market watchers say sterling’s rally may be drawing to a close as speculators start taking profits after a more than 5 per cent rally since early November, unless economic data improves markedly.

Officials from the Spanish and Dutch finance ministries denied the report and said there was no new agreement between the countries on how Britain should leave the EU.

“I think we will soon start seeing other European central banks come out to reject this idea before the trade negotiations kick off in early March, and that should weigh on sterling in the short term,” said Morten Helt, a currency strategist at Danske Bank in Frankfurt.

Sterling traded as high as $1.3770 on Monday after jumping 1.4 per cent on Friday, its biggest daily rise since mid-September.

It is already up 2 percent in the opening weeks of the year as hedge funds and investment banks brought sterling into their currency portfolios, betting that its extreme undervaluation against some of its rivals might start to disappear.

After slumping in 2016, the pound last year had its best performance in a decade as Britain made some progress on negotiating its exit from the European Union and economic data came in better than expected.

Some traders expect Britain to secure a transitional deal to leave the EU soon, which could help lift sterling higher.

On a trade-weighted basis, sterling was at 78.2, a substantial discount to a pre-Brexit vote level of 88.1 while on most investment bank models, the fair value of sterling is somewhere between $1.40-$1.50.

Tuesday will offer a stern test for sterling bulls with consumer price inflation data. Expectations are for a 3 perc ent rise in prices for December according to forecasts and any undershoot would kick sterling lower.