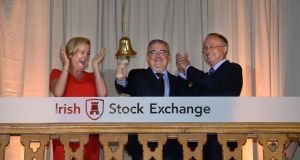 The Irish Stock Exchange hosted thousands of new bond listings during the second quarter of 2017, including the world’s largest ever sukuk issuance which netted the kingdom of Saudi Arabia $9 billion.

Sukuk refers to the Islamic equivalent of bonds, but adheres to sharia law, which prohibits the charging or payment of interest. The kingdom raised funds through two listings on the main securities market of the stock exchange.

The listing was one of 2,886 new bond listings, which included green bonds, and debt-raising by sovereigns, banks and multinationals, according to the exchange’s official statistics for the second quarter of 2017.

Other listings included China Three Gorges Corporation, the manager of the largest hydropower project in the world, which listed a €650 million green bond.

The number of securities listed grew to more than 35,600 and represent more than 4,000 issuers from more than 85 countries.

The exchange also hosted the largest initial public offering in Europe when AIB was floated by the Government in June, raising €3 billion for the State. AIB is also in London.

The statistics show that, since the IPO, trading in AIB shares has been concentrated on the Irish exchange, with 95 per cent of trading to the end of June executed in Dublin.

Equity turnover increased by 4.1 per cent, while the Iseq Index is 4.8 per cent ahead in the year to date.

The NTMA, which is the State’s debt agency, raised €3.7 billion during the period through government bonds and treasury bills.