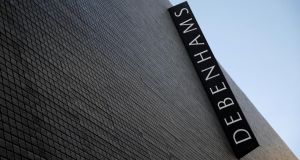 Struggling department store Debenhams was a bright spot after Sports Direct’s Mike Ashley made a move towards running the more than 240-year-old company.

European equities finished the week on a negative note, resulting in stocks notching up their biggest weekly fall since December.

Losses extended after weak economic data in China and Germany, plus poor US jobs numbers, deepened bearish sentiment and fears about a global slowdown.

The Iseq index bucked the declining trend, closing up 1.2 per cent. Cairn Homes was a key climber, rising 3.1 per cent to €1.33 and recovering ground lost on Thursday when its shares fell despite the publication of strong profits and revenues for 2018.

AIB, which confirmed Colin Hunt as its new chief executive, closed up 1 per cent at €3.90, but Bank of Ireland slipped about 2.3 per cent to €5.38 and Permanent TSB was down more than 6 per cent at €1.35 on light volume.

But it was a better day for building materials giant CRH. The cement-maker, which has acquired Florida-based storm water management company Suntree Technologies, finished at €27.45, up 0.15 per cent.

The FTSE 100 pulled lower by a fall in gambling firm GVC on news that its top executives cut stakes and a decline in oil majors after Norway’s sovereign wealth fund said it would sell its upstream oil and gas holdings.

Struggling department store Debenhams was a bright spot after Sports Direct’s Mike Ashley made a move towards running the more than 240-year-old company. The main index and the FTSE 250 both closed 0.7 per cent lower on the day.

Ladbrokes owner GVC plunged 14 per cent – its steepest drop in nearly nine years – to levels last seen in July 2016, having traded 18 per cent lower earlier in the session, after its chairman and chief executive sold some of their holdings in the company at a discount.

Oil majors Shell and BP were the biggest drags on the main index after the Norwegian government said its trillion-dollar sovereign wealth fund, the world’s largest, will drop oil and gas companies from its benchmark index and its investment universe.

The Stoxx 600 fell 0.8 per cent on the day, with losses worsening in afternoon trading.

Basic resources fell 1.7 per cent and autos stocks tumbled 1.3 per cent after China reported its biggest drop in exports in three years and German industrial orders unexpectedly fell. Germany’s Dax was down 0.5 per cent, while the French Cac 40 was more than 0.7 per cent lower.

Iliad shares fell 5.3 per cent after analysts at Exane downgraded the French telecoms stock to “underperform”.

Technology stocks were little changed after Democratic presidential candidate Elizabeth Warren proposed to break up the largest companies, including Amazon, Alphabet’s Google and Facebook, calling them anti-competitive behemoths. The sector was already trading lower as a result of the disappointing jobs data. – Additional reporting: Bloomberg/Reuters