CRH also solid, helped by positive data from US 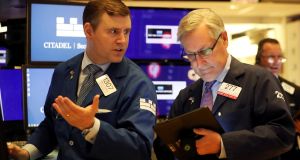 Trade was mixed on Thursday as markets prepared for the long Easter weekend. Photograph: Reuters

Trade was mixed on Thursday as markets prepared to shut down for the long Easter weekend.

Insulation specialist Kingspan rose 1.85 per cent to €46 after the board of Recticel sought more information from the Irish group on a €700 million bid.

Kingspan offered €700 million for Belgian player Recticel’s insulation and flexible foam divisions this week, but said it would sell on the foam maker to a unnamed third party.

Recticel’s board said it had asked Kingspan for the third party’s name and how it intended to deal with the competition law risks linked to its bid.

Brokers said investors saw the Recticel response as positive for the Kingspan bid.

AIB dipped despite announcing plans to buy payments company Payzone in partnership with First Data Corporation. The bank’s shares closed 0.1 per cent down at €4.246.

The lender outperformed peer Bank of Ireland, which shed 1.16 per cent to close at €5.95.

Global building materials group and index heavyweight CRH advanced 2.69 per cent to €30.53. Traders said some positive data from the US, where the Irish group earns half its revenues, boosted CRH stock along with shares in some of its European rivals.

Airline Ryanair gained altitude for the sixth successive day, closing 1.24 per cent up at €12.63 after hitting a high of €12.71 during Thursday’s session.

Property company Green Reit added 0.7 per cent to €1.722. Dealers said there was strong interest from institutional investors in Green, whose board earlier this week said it would sell the company to realise value for shareholders.

Shares in price comparison group Moneysupermarket. com soared after the company said revenues rose 19 per cent to £105 million as consumers reacted to news that the government intended lifting a cap on energy charges.

Moneysupermarket.com closed 4.28 per cent ahead at 363 pence but its shares were as much as 9 per cent up in early trade shortly after the company published its trading update.

Consumer goods giant Unilever, maker of Magnum ice creams and Domestos bleach, climbed 125.5p or 2.9 per cent to 4,503.5p, propelling the firm to the top of the London’s blue-chip FTSE100 index.

The group reported a 1.6 per cent decline in overall turnover to €12.4 billion but on an underlying basis sales were up 3.1 per cent.

It got a boost from buying sprees during the first quarter. The group reported an 8.9 per cent increase in ongoing revenue to £603.6 million.

FTSE 250-listed Intu was trading higher as the under-pressure shopping centre operator sold a 50 per cent stake in its Derby site to investment firm Cale Street for £186 million.

The group, which also owns the Trafford Centre, has had a challenging year amid a retail crisis and failed merger talks but shares closed up almost 4 per cent at 101.7p.

Luxury goods maker Kering dropped more than 5 per cent to €510.40 on signs of a slowdown at the French fashion company’s Gucci brand.

Confectioner Nestlé gained 0.8 per cent to €95.85 after reporting higher-than-expected sales growth in the first quarter of the year.

Wall Street eked out gains in volatile trading on Thursday, ahead of a long Easter weekend, as strong results from industrials countered another drop in healthcare stocks, with investors shrugging off release of the Mueller report.

Retail sales were up the most in 18 months in March, while unemployment claims fell, data said.

Providing the biggest support to markets was a 1.09 per cent rise in industrial stocks, after a batch of upbeat earnings reports. Union Pacific Corp jumped 4.6 per cent, while Honeywell International’s shares rose 3.4 per cent after better-than-expected quarterly profits.

Pinterest, on its first day of trading, saw a 25 per cent pop in its shares. – Additional reporting: Reuters