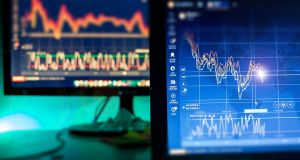 AstraZeneca and GlaxoSmithKline were among the biggest drags on the FTSE 100, following a sell-off in US healthcare stocks over regulatory worries on Wednesday.

Financial stocks exposed to Asia fell, with HSBC, Prudential and Standard Chartered all in the red, after Asian share retreated from their nine-month highs, tracking losses on Wall Street.

“If Europe is still struggling, then we’re not going to see any significant pick up in UK stocks, certainly not the more global ones, because we need to sell them stuff,” CMC Markets analyst Michael Hewson said.

BAE Systems and Reckitt Benckiser, which were trading ex-dividend, lost 2.9 per cent and 0.6 pe rcent, respectively, on the FTSE 100.

Shell and BP also dropped along with oil prices, as strong US crude oil production offset gains from Opec-led supply cuts and a decline in US crude inventories.

The FTSE 250 was dragged down by stocks trading ex-dividend. Motor insurer Hastings, power producer Drax and engineering firm Vesuvius were the worst performers.

But price comparison website Moneysupermarket. com jumped 7.6 per cent after a rise in first-quarter revenue on strength across all its divisions. – Reuters