In Dublin, Green Reit jumps after chairman announces group is up for sale 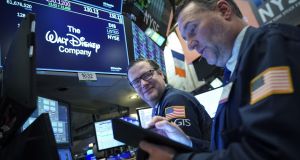 The New York Stock Exchange. Bank of America dipped 1.4 per cent ahead of results on Tuesday. Photograph: Drew Angerer/Getty Images

European shares ended higher on Monday with telecom and retail stocks leading gains as Sino-US trade optimism and strong Chinese economic data eased some worries over global growth - though lacklustre earnings from big US banks weighed. The pan-European STOXX 600 index rose for the fourth straight session, hovering near eight-month highs with most indices in the region gaining, apart from Britain’s FTSE 100 which lost ground as miners and oil majors fell.

Investors are bracing for earnings to come later in the week and will also be scrutinizing data - including Germany’s ZEW survey and Chinese gross domestic product due on Wednesday.

The springer in the market was Green Reit, which rose nearly 7 per cent to €1.64 after the company was put up for sale. Chairman Gary Kennedy said despite firm’s substantial €1.5 billion portfolio its share price has been “subject to a material and persistent structural discount to its net asset value per share for over three years now”. Rivals Ires and Hibernia were lifted 1.8 per cent and 0.9 per cent respectively on the back of the news, albeit on low trading volumes.

Iseq heavyweight Ryanair was up 2.8 per cent at €11.98 but not on the back of any stock-specific news. The other big mover was Paddypower Betfair, which rose 3 per cent €76.62. The company was buoyed by a report highlighting the potential of the US, which it has recently bought into .

Elsewhere Bank of Ireland followed the positive trend for financials, closing up nearly 4 per cent at €6.05 but rival AIB sagged 0.8 per cent to close at €4.22. Cuisine de France owner Aryzta had another good day, rising 2.3 per cent to €1.24 as it tries to reverse the group’s financial fortunes.

Britain’s FTSE 100 was at a loss for direction on Monday as a dip in miners and oil majors offset gains in bank stocks, while office group IWG pushed midcaps higher after announcing an asset sale. The blue-chip index ended a lacklustre session about flat, lagging its European peers, while the FTSE 250 held on to its six-month high with a 0.5 per cent rise as a stronger pound also aided.

Shell and BP extended losses following a dip in oil prices. Financial stocks jumped to a six-month high, bolstered by a read-across from last week’s upbeat results from US bellwethers JP Morgan and Wells Fargo, and strong bank loan data from China.

Serviced office space provider IWG surged 21.1 per cent to a two-year high after plans to sell its Japanese operations for £320 million and a double upgrade from Credit Suisse on the stock.

Shares in Danish healthcare company Ambu rose more than 7 per cent, making it the biggest gainer on the Stoxx 600, after the US FDA said products produced by some of its rivals had higher than expected levels of contamination. French media conglomerate Vivendi closed at a more than 11-year high after it posted higher first-quarter revenue and said it was forging ahead with the planned sale of up to 50 percent of its UMG music arm.

Shares of Norwegian metals maker Norsk Hydro rose to more than two-month highs after the company won further support for its bid to resume full output from its Alunorte alumina refinery in Brazil.

Wall Street’s main indexes fell on Monday, following a rally in the previous session that put the S&P 500 within striking distance of its record high, as underwhelming results from Goldman Sachs and Citigroup pressured financial stocks. The sector fell for the first time in four sessions, down 0.75 per cent, dragged lower by a 3.2 per cent tumble in Goldman Sachs and a 0.7 per cent dip in Citigroup after the banks missed revenue estimates. The S&P banking index fell 1.12 per cent , also weighed down by a 1.6 per cent drop in JPMorgan Chase. Bank of America dipped 1.4 per cent ahead of results on Tuesday. Analysts expect S&P 500 companies to show a 2.1 per cent year-on-year decline in earnings, their first annual contraction since 2016. - Additional reporting by Reuters