Iseq closes 0.8 per cent higher with Applegreen and Ryanair among main gainers 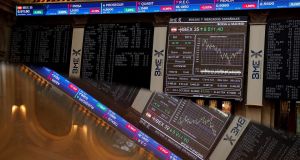 At the Stock Exchange in Madrid the Ibex 35 dropped 0.31 per cent at the start of the trade session. Photograph: EPA/Emilio Naranjo

European shares advanced on Wednesday as investors globally cheered strong data from China, which has served to ease concerns about an economic slowdown in the world’s most populous country.

China’s industrial output surged 8.5 per cent in March from a year earlier, the fastest pace since July 2014 and well above forecasts of a 5.9 per cent increase. Retail sales also pleased, with a rise of 8.7 per cent.

“Beijing will now be in a wait-and-see mode to gauge whether it has done enough,” said Neil Dwane, an Allianz Global Investors strategist, referring to stimulus efforts by China. “To be bullish [on stocks] from here you would have to believe in a pretty strong global recovery in the second half . . . We are a bit more ho-hum.”

Banks had been largely out of sorts earlier in the session, as investors considered comments from outgoing Central Bank of Ireland governor Philip Lane late on Tuesday that he was seeking powers that would enable the regulator to force banks to hold more capital if systemic risks increased.

Bucking the trend, Dalata Hotel Group dipped 1.9 per cent to €6, with investors ignoring a push on the stock by analysts at Investec as they reiterated their “buy” rating.

Britain’s FTSE 100 was off its six-month high as a fall in miners over Vale’s plans to reopen a major Brazilian mine offset gains in banks after upbeat data from China, while Bunzl sank on a slowdown in revenue growth.

The FTSE 100 was little changed by session end.

Miners lost 1.2 per cent after Vale said it expected to resume operations at its Brucutu mine within 72 hours.

London-listed shares in Rio Tinto fell 2.7 per cent and BHP, the world’s biggest miner, gave up 2.5 per cent after cutting its iron ore output target following a tropical cyclone.

Business supplies distributor Bunzl plunged 9.3 per cent on its worst day in a decade after reporting a slowdown in quarterly growth due to sluggish performance of its grocery and retail business in North America, its biggest market.

Positive data from China brought back some appetite for riskier holdings and hurt safe haven assets. As a result, dollar earners including AstraZeneca, GlaxoSmithKline and British American Tobacco weighed on the main bourse.

Shares of Juventus Football Club plummeted 17.6 per cent to €1.39 after the Italian team was knocked out of the Champions League overnight by the Dutch outsiders Ajax. Ajax soared by 9 per cent to €18.70.

Danone slipped as much as 2.1 per cent after the French food group’s first-quarter sales slowed on weaker demand for infant formula products in China and a consumer boycott in Morocco. However it rallied off its lows to close down 0.1 per cent.

US stocks headed lower in early afternoon trading, as a sell-off in healthcare stocks extended for a second day, overshadowing a rally in chipmakers led by Qualcomm.

The S&P healthcare was on pace to wipe out its yearly gains over concerns about potential changes to healthcare policy as 2020 presidential election looms.

Chipmakers, which get a huge portion of their revenue from China, rallied, with the Philadelphia chip index rising more than 1 per cent.