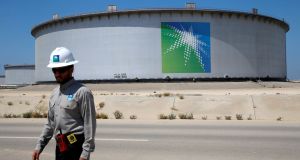 The Saudi state-backed oil producer – which last week revealed it was the world’s most profitable company – opened up the six-part bond sale to investor orders on Monday. By that stage it had already received more than $30 billion indicative orders across a series of investor meetings in Europe, Asia and the US, three times more than the $10 billion expected deal size.

The now $100 billion of orders has smashed records for an emerging-market bond sale, surpassing the $67 billion of demand Saudi Arabia itself saw in its wildly popular 2016 government bond market debut.

Aramco’s order book is also now approaching some of the biggest seen even in developed market debt deals, with US pharmacy group CVS Health drawing $120 billion for a bond sale backing its acquisition of Aetna last year.

“The roadshow was all about Aramco comparing itself to the oil majors that investor base knows well, which was definitely a different pitch to the usual state-owned enterprises that talk up to their links to the sovereign,” Mr Simond added.

The bond sale is intimately tied to Saudi crown prince Mohammed bin Salman’s vision to open up the desert kingdom’s economy to the wider world, after his grander plan of listing a stake in Aramco on stock markets faltered.

Neither banks nor investors have been deterred from taking part in the high-profile deal despite displays of outrage over the killing of Mr Khashoggi, the journalist, in the Saudi consulate in Istanbul last year. A Riyadh conference in October, dubbed “Davos in the desert,” was boycotted by several prominent business leaders – including Jamie Dimon, the chief of JPMorgan Chase, which is now leading the Aramco bond sale alongside fellow US investment bank Morgan Stanley.

One investor following the deal said that the flood of demand also reflected the scarcity value of the debut bonds. Saudi Aramco’s treasurer has told investors that the company does not need to raise the money, because of its “fortress-like corporate position”, and is focused solely on opening up the historically secretive group to public investors for the first time.

The state-backed oil company is marketing the new bonds at a price in line with Saudi government bonds. As debt issuers typically seek to reel in borrowing costs shortly before deals close, that suggests Aramco may lock in an even cheaper price than the Saudi government.

That would be highly unusual, given the oil producer’s close links with the Saudi state. But Aramco may still achieve this feat as to the yields on offer are at a healthy premium to those of major US oil producers such as ExxonMobil and Chevron.

While credit rating agencies rate Aramco in line with the Saudi government, in the single A bracket, the oil company has told investors that Moody’s would have given it a top-notch triple A rating if it were a standalone company, as it produces enough cash each year to cover its debt many times over.

A banker close to the bond issue said investors were generally drawn towards the parts of the deal with the longest maturities, seeing a chance to buy 20- and 30-year bonds at relatively higher yields.

The rush of demand for the Aramco deal has also depressed yields on Saudi Arabia’s government bonds over the past week, reflecting a rise in prices. The country’s 30-year dollar bond yield has fallen about 0.2 percentage points to 4.58 per cent.

Aramco’s deal is due to wrap up later on Tuesday. – Copyright The Financial Times Limited 2019