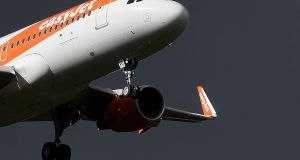 EasyJet shares were the biggest gainers on the FTSE on Tuesday. Photograph: Toby Melville/Reuters

Ireland’s benchmark index outperformed European markets on Tuesday in terms of percentage gain even though Germany’s Dax hit a record high after closing up 0.7 per cent. The pan-European Stoxx 600 edged 0.1 per cent higher.

In the UK, a rally of more than 5 per cent in airline EasyJet following a trading update drove Britain’s top share index higher while, in the US, the S&P and the Nasdaq rose as upbeat earnings from Netflix spurred gains for the highly-valued technology sector.

It was a strong day on Ireland’s Iseq overall index, which advanced 1.17 per cent in a session that featured far more gainers than losers.

With strong momentum, the real estate investment trusts (Reits) were the biggest gainers on the smaller Iseq 20 index. Hibernia Reit ended up by 2.57 per cent while Green Reit closed 2.31 per cent stronger.

The overall index was buoyed by heavyweight CRH, which rose by 1.93 per cent to €31.527. The company is considered to be one of the significant benefactors of any infrastructure plans announced in the US.

Following healthy results from its peer EasyJet, Ryanair closed up by 2.06 per cent at €16.84. It was a strong day for the airline industry with EasyJet’s success pointing to improving average fares.

Bank of Ireland was the strongest of the financials, closing up 2.13 per cent at €8.14. AIB, meanwhile, edged up by 0.18 per cent, albeit on more than double the volume.

The FTSE gained 0.2 per cent on the day, in line with the broader European market as the pound gave back some of its gains.

EasyJet shares were the biggest gainers on the FTSE and enjoyed their best day’s gains since early October.

Sky rose 2.3 per cent after Britain’s competition regulator CMA told Rupert Murdoch that the $15 billion takeover of Sky by Twenty-First Century Fox was not in the public interest and would be blocked unless there was a way to prevent the tycoon from influencing the network’s news output.

Elsewhere, gains among heavyweight oil companies provided support to the FTSE, as crude oil prices rose, while a broker upgrade boosted shares in Croda International. Miners were a weak spot with Fresnillo, Evraz, Anglo American and Glencore leading losers with declines of 2.9 to 4.2 per cent.

Investors cheered plans by Europe’s biggest retailer Carrefour to slash costs, open its loss-making Chinese business to new investors and spend more heavily on ecommerce in the face of competition from Amazon. Carrefour touched a five-month high with a 3.2 per cent rise.

Shares in computer peripherals and mobile speaker maker Logitech were the biggest gainers, jumping 8 per cent after it reported better than expected sales and raised its guidance.

Hungarian low-cost airline Wizz Air rose 5.3 per cent after saying it was interested in Italy’s struggling flag carrier Alitalia but only in its short and medium-haul routes.

Online grocery technology provider Ocado inched up a further 0.9 per cent after a 27 per cent surge on Monday when it unveiled a deal with Canada’s second-largest food supermarket group Sobeys.

Netflix jumped 11 per cent to a record high and surpassed $100 billion in market value after the video-streaming pioneer beat Wall Street targets for new subscribers in the fourth quarter.

The gains also boosted other FAANG stocks, led by Amazon.

Johnson & Johnson fell after a US appeals court upheld a ruling that invalidated a crucial patent on its blockbuster rheumatoid arthritis drug Remicade, limiting its ability to seek damages from Pfizer over the latter’s launch of a lower-cost version of the drug.