Investors phlegmatic in the face of US government shutdown

Paddy Power Betfair fell more than 2 per cent in London, as fears of a UK government clampdown weighed on gambling sector 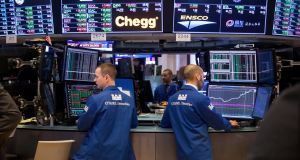 A flurry of merger activity among European stocks drove strong moves on Monday as some regional indexes notched up new records, with investors shrugging off the US government shutdown as a global stocks “melt-up” continued to grip European markets

In New York, the S&P and the Nasdaq hit fresh records as investors bet US lawmakers would strike a deal to end a federal government shutdown – something that ultimately happened.

Independent News & Media (INM) gained almost 4 per cent as the share continued to regain ground on news that it is overhauling its board and its chairman, Leslie Buckley, is stepping down.

It was a mixed bag for travel-related stocks. Ryanair spent the day in negative territory and finished down 1.6 per cent, as investors remain wary of recent changes at the airline. ICG, the owner of Irish Ferries, a rival to Ryanair on UK-Irish routes, rose by almost 0.4 per cent.

Shares in William Hill and Ladbrokes fell 11.6 per cent and 7.9 per cent respectively after reports that the government was set to lower the limit on betting-shop terminals to £2 from £100 in a move that could hit their revenue.

Among other outstanding movers were shares in Ocado, up 27.5 per cent, after the online grocer signed a deal with Sobeys to develop the online grocery business at Canada’s second-largest food retailer.

On the FTSE, NMC Health rose 2.4 per cent to a new record high after it announced the acquisition of majority stakes in a cosmetic surgery company.

Consumer staples took the most points off the FTSE 100, nearly nine points, with overseas earners Diageo, British American Tobacco and Unilever falling as sterling rose towards $1.40.

French drugmaker Sanofi fell 2.9 per cent after it announced an $11.6 billion takeover of US haemophilia treatment specialist Bioverativ, with some traders saying the deal looked expensive.

Richemont shares closed down 1.6 per cent as investors digested the up-to-€2.8 billion offer, a nearly 26 per cent premium over YNAP’s closing price on Friday.

UBS, Switzerland’s biggest bank, recovered after an early fall when it reported a quarterly loss, driven by a large writedown on the US tax reforms. UBS still boosted its dividends and was up 0.4 per cent at the close.

Defence stocks such as Boeing, Northrop Grumman and L3 Technologies dropped between 0.6 per cent and 1.1 per cent, sending the defence sector index down 0.7 per cent.

Boosting the Nasdaq was a clutch of biotech deals, with the biotech index up about 2.3 per cent. Shares in haemophilia specialist Bioverativ soared 63 per cent on the news of the Sanofi deal. Juno Therapeutics rose about 27 per cent after Celgene agreed to buy the biotech for about $9 billion in cash.

Halliburton rose 4.2 per cent after posting a much bigger-than-expected quarterly profit in the fourth quarter.

Netflix, a major contributor to the recent stock rally, was up nearly 3 per cent ahead of its quarterly results. – Additional reporting: Reuters