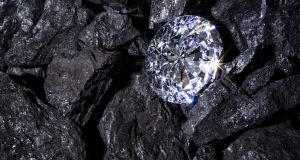 An Irish diamond exploration company, Karelian Diamond Resources, has been granted a four-year licence in Finland.

In a statement on Monday, Karelian said the Finnish mining authority had granted the exploration license in the Kaavi region of the country.

The 28.84 hectare licence is close to the company’s Lahtojoki mining operation and covers an area near where kimberlite boulders were discovered last year. The finding of kimberlite is significant as these igneous rocks can sometimes contain diamonds.

While the licence can be appealed within the next 30 days, after that Karelian has the exclusive right to apply for a mining permit.

The most recent set of accounts for Karelian for the year ended May 2017 show the company’s losses mounted almost 59 per cent to €410,814.