How US funds are using IPOs to boost Irish property returns

Ireland has catching up to do building up warehousing infrastructure 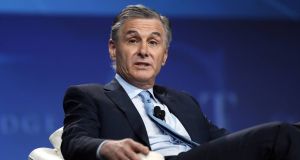 Jamie Dinan: forced to cross the globe to persuade big investors to stick with his funds as they grappled with weak returns and money withdrawals

A year ago, US hedge-fund billionaire and part owner of the Milwaukee Bucks baseball team, Jamie Dinan, was under the cosh.

The then 57-year-old – who founded York Capital Management in 1991 after dusting himself off following the loss of his savings in the 1987 Black Monday market crash – was forced to fuel up his private jet and cross the globe to persuade big investors to stick with his funds as they grappled with weak returns and money withdrawals.

As the wider hedge fund industry went through its biggest streak of outflows since the start of the financial crisis, York Capital saw its assets under management plummet from $26 billion (€21.2 billion) to $17 billion in 2016.

The stress could even be seen in Ireland, where York Capital raised €140 million that year from the sale of the 10 per cent stake it had accumulated in Eir following the phone company’s 2012 debt restructuring. The buyers: fellow Eir investors, hedge funds Anchorage and Davidson Kempner and Singaporean sovereign wealth fund GIC.

The past 12 months, however, seem to have been kinder for York Capital. Dinan has killed off speculation that he may close down the firm, investment returns have reportedly bounced back, and the hedge fund manager appears to have settled an internal power wrangle by naming two lieutenants as his future successors.

It also emerged this week that York Capital is taking a more medium-term approach to other Irish investments: commercial property that it had snapped up under the radar following the financial crisis.

The Irish Times reported on Wednesday that the New York-based firm plans to move about €80 million of industrial units – in locations like Rathcoole in southwest Dublin, Naas in Co Kildare and Clonee in Co Meath – into a new real-estate investment trust, Core Industrial Plc, being lined up for an initial public offering (IPO).

The plan is to raise up to €250 million to help fund the purchase of similar assets, including prime locations around Dublin Airport. Logistics and industrial property is the hottest segment of the Irish commercial property market at the moment, delivering total returns of about 14.5 per cent in the year through September, according to the MSCI Ireland Property Index.

That compares with a 10.5 per cent return during the same period for the office market, which initially led the real-estate recovery after the crash, and 10.8 per cent for the retail investment market.

With Irish consumers having returned to rude health in recent years, demand is growing for places to stock goods. The ongoing growth in online retail plays particularly into this theme, driving industrial rental yields higher and prompting companies to look for longer-term leases.

Green Reit, the office-focused Irish real-estate investment trust that is investing increasingly in industrial and logistics, highlighted recently that Brexit may boost demand for warehouse space “due to the likely changes to the UK’s trading arrangements with the EU”.

Green Reit, which in 2013 became the first Irish real estate investment trust to float, has also recently sold a number of retail parks to focus on logistics in the belief that Ireland has catching up to do building up warehousing infrastructure.

It makes you wonder why York Capital – which is lining up Daniel Donovan, a former partner with UK investment firm Grainmarket Asset Management and one-time Lehman Brothers employee, and Dublin property figure William Redmond to lead Core Industrial – is stopping at raising €250 million. After all, sources say it sees an opportunity to acquire and develop more than €500 million of assets?

The reason may lie in the lucrative management and performance fees York Capital is sure to be eyeing – following the trend of other Irish property IPOs in recent years.

Companies from Green Reit to Cairn Homes have played a masterful game placing shares in a rising market since their IPOs to fund acquisitions, boosting shareholder – and more importantly – founders’ and promoters’ returns in the process. A spokesman for the company declined to comment.

It’ll be interesting to see how stretching the performance targets will be.

York Capital is not alone in turning to the stock market to boost returns on Irish real estate.

US private equity Oaktree rolled residential development land it got its hands on following the crash into recently-created Glenveagh Properties, which raised €550 million as it floated last October.

The cash leaves Glenveagh as one of the few properly capitalised companies in the market able to take advantage of chronic undersupply of housing as residential price inflation is running at about 12 per cent.

Shares in Glenveagh – in which Oaktree retains a 16.5 per cent stake – have shot up 25 per cent in the three months since the flotation, pushing its market value to as high as €840 million.

Helped by the dollar’s recent drop against the euro, this has pushed Glenveagh’s market valuation above $1 billion – breaching the threshold for what is known in the world of start-ups as a “unicorn”.

Oaktree is banking on more than mythical returns on this one.